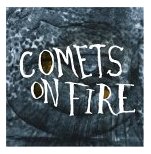 As a fan of psychedelic rock, I was expecting to have my head blown off by Blue Cathedral, the latest release by Comets on Fire. Julian Cope has been citing these guys as the saviors of Acid Rock, so I was expecting some kind of life-changing experience from this album. Unfortunately, it just feels like more of the same shit I've been hearing for years. Bands like The Heads, Acid King, and Electric Wizard have been melting minds for a while and have done more justice to the stoner rock genre than Comets on Fire.

Don't get me wrong — I'm a fan of Blue Cheer and Black Sabbath and I can see that they're even pulling some influences from more eclectic acts like Ash Ra Temple and Amon Dul. But the songs on this record just don't live up to the hype. There are some great noises and interesting changes, but they tend to recycle approaches from song to song. Somebody needs to tell that Echoplex guy to give it a fuckin' break — there's only so much delay freakout you can take in one sitting. It's like those bands that use a wah wah pedal for every guitar solo. Fuckin' Christ!

One saving grace is that most of the songs are instrumental. When singer Ethan Miller starts going at it, I am reminded of everything that I hate about Soundgarden and Led Zeppelin. Bad news. This album wins points for not being a typical rock record. The songs do get into a groove and the album has a nice cohesiveness to it. The songs fit well together and are good songs for the bong. I just wish they would open themselves up more and really dig into their creative side instead of getting lost in the hash jar. However, for fans that don't mind another addition to their lengthy psych collections, or for anyone needing a soundtrack for their first acid trip, this album will work out just fine.