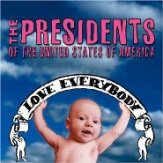 The Presidents of the United States of America have always made really great pop songs, unabashedly immature in lyrical content but surprisingly smart and incredulously catchy. Their latest release, Love Everybody, puts them right back on the map where they left off.

Despite a several-year hiatus (in December 1997 the Presidents disbanded), PUSA are again ready to rise to the top of pop charts and goofy music-lovers' collections everywhere. The band, Chris Ballew (vocals, "basitar"), Dave Dederer (guitar) and Jason Finn (drums) have a formula down pat: play sing-along, harmonically balanced pop tunes, don't be too serious, and don't even use real — salable if you will — instruments (their "basitar" has only two strings; their guitar just three).

It may sound odd, but it's a formula that has worked well for the Presidents. Their 1995 debut record, The Presidents of the United States of America, went double-platinum, produced three Top 40 hits ("Lump," "Kitty" and "Peaches") and gained two Grammy nominations (in addition, the record was the most-played album at the now-defunct Camelot Music in Northgate Mall during the summer of 1995. I swear. I was there, straightening the wall of tapes.) Their second release, II, was also successful, and they can still be heard churning out the theme to "The Drew Carey Show" on nightly reruns.

When the Presidents broke up, though, a band we could all count on to provide humor in a dark world left us scratching our heads. Why quit seemingly at the top of your game? According to the PUSA website (presidentsrock.com), it was pretty simple: "It all became a bit overwhelming," says Dederer. "We went three years without a day off and worked ourselves to exhaustion. Eventually, we reached a point where we had to take a break." The three embarked on separate projects as well briefly reformed, along with "Buttermilk Biscuits" — loving Sir Mix-A-Lot, for the Subset project.

But now they are back in office, and their return couldn't come at a finer time. After all, we clearly need some smiles to accompany the word "President" — something that won't happen for this imaginary writer until that fateful day in November when we kick our current weasel of a leader out to pasture (Need more proof? This is a great start!)… But I digress.

Love Everybody opens with the hug-your-neighbor-and-any-random-stranger title track, a bubbly number that leads off the entire disc well. The first single is quintessentially Presidents: "Some Postman" details the life of a nosy postal worker who steals and reads love letters. "Surf's Down" is a groovy keyboard number to get you doing the twist. And the closing track, "Jennifer's Jacket," approaches Squeeze-ish harmonies (never a bad thing).

There is enough stress in having the title of President of this country. These Presidents, instead, want purely to make us dance and have a laugh. Their album name says it all: Love Everybody. It's pure fun — and that is the way the Presidents want it. Re-elect the Presidents!