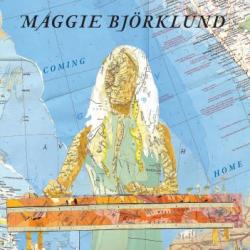 Bloodshot Records, a label always known for high quality music as well as eclectic realness, has put out the new album by Steve Fisk and Johnny Sangster guitar/steel guitarist session player Maggie Bjorklund. It’s a dreamy, waltzy, life-in-amber collection of seaside castaway whirls and marches. If you remember Bjorklund’s work with Danish band the Darleens, you’ll want to pick this up right away. Especially if you’ve been familiar with her excellent work recently with Mark Pickerel and His Praying Hands, and weaving a bed of pedal steel as well on songs by The Dept of Energy, Christy McWilson, and the recent album which slays me most, Rusty Willoughby’s Cobirds Unite.

Coming Home is noteworthy simply as a tender collection of vivacious guest vocals, including Mark Lanegan, whose work on “Intertwined” is like hearing the lead crooner in a Francis Ford Coppola fantasia-musical. Rachel Flotard follows with my favorite track, “Summer Romance,” and her icy vocals juxtapose with the lyrics “softly cigarettes / will dance on our regrets” like the best Neko Case couplet, who she happens to give quite a run for her money.

Jon Auer from The Posies comes in third in the sequence of vocalized songs on “Vildspor,” and his sweet lines are more restrained and overshadowed just little by Lanegan’s smoothness and Flotard’s fire coming before. But it’s nice to have the diversity, and those two can be pretty intense just taken by themselves anyways. “The Anchor Song” is another Bjorklund/Flotard collaboration (in both words and voice as well) and is possibly the starkest point of the CD, coming after the trapped under ice instrumental “Falling.” Lyrically as dense and terrifying as a T.S. Eliot poem, it betrays with its delicate delivery.

Producer and player Johnny Sangster has bravely and very capably taken the reins from Calexico’s Joey Burns and John Convertino for the follow up to Bjorklund’s 2009 debut. Coming Home is gorgeous uneasy listening music, and the central artist’s choice of collaboration is as inspired as the notes she bends to infinity.