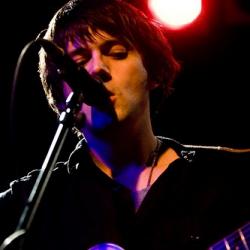 Conor Oberst and the Mystic Valley Band at Neumos

Strolling up to the imposing line situated in front of Neumos Wednesday night (a show that soon sold out), I was greeted not only by a throng of impatient fans waiting outside well past doors (8PM), but a majestic silver tour trailer stationed right in front of will call as well.

Rilo Kiley on cracked out reverb is the best way I can think of to describe opening act Dri. The flaxen haired Adrienne rocked out with her tambourine. I could nary steal a glance at the band as the packed as sardines rock club throbbed with heat. The guitarist, however, on the the far side of the stage caught my eye more than a couple times. I must have spent half the set trying to figure out who he looked like. The answer came in the form of an underhanded remark made by a person standing very close behind me after the set. “That Jim James look alike is really starting to freak me out”.

For whatever reason, I was under the impression that Oberst would bust out at least a couple Bright Eyes songs. Ladies and gentlemen, do not be mistaken: Conor Oberst and the Mystic Valley Band is not Bright Eyes.

I was first treated to Bright Eyes live show late last year at Endfest (which by no means was a proper introduction) and was pleasantly surprised, but definitely not blown away by his performance. I did not know what t expect from Oberst’s new project, but definitely anticipated his entrance on stage. I still remember the day years ago I walked into Borders and happened across the magazine racks where lo and behold- Oberst’s face adorned the front cover of Rolling Stone denouncing him as “this generation’s Bob Dylan.”

Of course I had to scoff! First off, who the fuck is this guy with dreamy brown eyes and where to people get off comparing him to Bob Dylan? After seeing Oberst and the Mystic Valley Band, there was no doubt in my mind that the Dylan comparisons were absolutely substantiated.

As the waifish Oberst removed his button up black shirt about midway through the set to reveal his gray tee and thin arms, more than a couple hoots were elicited from the predominantly female audience. “Easy now ladies!” called a voice from an indiscernible location.

Just like the characters in the songs he sculpts, Oberst is a real piece of work–a work of art, if you will. All his strange eccentricities, manner of half completing a sentence, adamant refusal to engage in any eye contact, and penchant for prefixing the names of his band members with various profanities, it’s strangely impossible to dislike the person he is on stage.   His intense and ever present soul bearing gaze reflects so much in the words of his songs.

Though clearly aged (his old hair cut did quite the job of hiding what may have been scores of sleepless nights), his cynically dark flame of a streak burned on. “If you love me, well that’s your fault.” he candidly crooned to the far corner of the room. “Don’t Want To Die (In a Hospital Room)” was a standout track that offered simple frustration and clearly appeared to appease the front row of the crowd as the mass group of people bounced along to Oberst’s swelling  banshee yelps of terror. The upbeat tune, coupled with Oberst’s insistent holler “Take me back outside!” was all I needed to know that I was at the right place at the right time. Every one of Oberst’s songs is a tale wherein the heart of his lucrative way with words unfold and manifest themselves into epic pieces of folk.

“You’re very kind, god bless you,” Oberst pleasantly told the audience as he seated himself in front of his piano for the set’s encore. The band ended the night with a beautiful rendition of one of my new favorite songs, “Breezy.” The perspiring audience watched in awe as Neumos hung on the folksinger’s every word. Oberst captivated the audience in a way so rarely seen. I can fully appreciate the rawness of his live show. Oberst will always be a little rough around the edges, and I know that this is what people relate to the most in his music. So long as he remains this way, his art will always be golden.