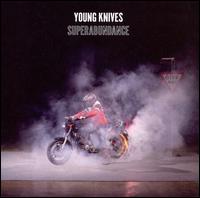 Ennui: A feeling of utter weariness and discontent resulting from satiety or lack of interest; boredom.

For possibly the first time in my life.

I'm not sure what brought it on. Maybe it was just burn out. Maybe it was saturation. Maybe it was that a lot of music I was listening to was just, well, unimpressive. In any case, for almost three months, I spent more time listening to streaming baseball games than music. I was in full-on musical ennui, and I wasn't sure if there was a bottom to this pit.

And then it just went away.

Not sure how, not sure if I could pinpoint it on any one event in specific – maybe it was seeing Tullycraft in West Seattle. Maybe it was just going for broke and buying a pile of new CDs to force myself out of this quagmire. Or maybe my subconsciously assigned sabbatical just came to an end without as much as an explanation or memo from the dark recesses of my mind. The headphones were back out. The CDs began to spin. The dust came off the iPod. I'm hoping that I can submerge myself back into the music that I ignored for almost half of 2008 – I'm sure I've missed a lot (or maybe not, that being part of the problem), but I can finally sit back and think about music without feeling (a) repulsed or worse (b) nothing.

But enough about me!

There were a number of casualties of my sonic doldrums, a number of albums that I should have dealt with many moons ago, but every time I stared at that cursor, I could not think of a single word to say about the darn thing. Now, I suppose I could feverishly try to make amends here, but I'm not going to play that game – there is just too much threat of a repeat dive into this so-called ennui. Instead, you may just have to tide yourself over knowing that some band out there just isn't going to get the credit it deserves and that's life.

The Young Knives, on the other hand, will get the words they deserve. Superabundance was one of those albums that was pretty much gone on arrival, it made nary a dent in the American musical conscience, whether it be mainstream or modern rock, which is too bad. Although it is very easy to lump the Young Knives with the multitude of mediocre British pop rock bands that have wandered their way across the north Atlantic over the last few years, the Young Knives have that little something different, that je ne sais quoi that betray a musical complexity that bands like the Klaxons, Futureheads and Cold War Kids lack. You can hear that instantly on "Terra Firma," a song that is like a poor man's "Take Me Out," mixing and matching different musical styles and rhythms with reckless abandon – the trio might be wearing their influences on their sleeves, but at least they're not wearing them from head to toe.

And the influences are there: the Beatles, Gang of Four, Ned's Atomic Dustbin, Duran Duran, you name it. The Young Knives are clearly part of the post-New Wave surge, combining the synth rock of the early '90s with the garage of the '00s with the pop sensibilities of the '60s. "Terra Firma," "Dyed in the Wool" and "Up All Night" definitely have that sound, with slightly-distorted-but-still-accessible pop melodies and a catchy as heck hooks and really, to me, that is 75% of what a band needs to do to succeed. However, that only takes you so far before you realize that the hook is as empty as band account. Luckily, the Young Knives were smart enough to open a rock and roll Roth IRA, integrating a depth that belies their pop solvency. "Turn Tail" is a lovely pop ballad right down to the string section while "Mummy Light the Fire" is Parklife-era Blur without the Madness. "Current of the River" builds tension slowly as the song rolls along until the chorus explodes, like hitting a waterfall on your canoe trip, only to return to the slow, churning rhythm of the verses. The real highpoint of Superabundance, beyond "Current of the River" and "Terra Firma" has to be "Rue the Day". It is a true injection of a Beatlesque melody into the 21st century, rolling in bed with a Ned's Atomic Dustbin rhythm section – think of the Earlies minus the overabundant psychedelia.

Superabundance is by no means a "transformative" album that with shake the pillars of western music. It is, however, one of those albums that can easily slip through the cracks, whether you are paying attention to every release that makes its way down the East Street pipe or you're trapped in a malaise where every piece of music you hear sounds like white noise. Whatever it was that drove me into that void of sound, the mere fact that I can actually put words to screen on the Young Knives and Superabundance makes me feel like we're going to make it through it all. Really we are.