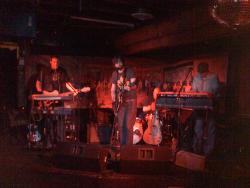 Hazelwood Motel started the night with quiet folksy vocals, crooning tri-part harmonies to the crowd like lullabies. The conversation level dropped for a bit, but picked back up before the beginning of a song. It seemed like there were three types of people in the crowd; some came to listen, many came to catch up with friends with the live music as background soundtrack, and a few even came to dance (a surprise to the keyboardist, who announced that she had flubbed a few notes while watching them). As Hazelwood Motel's set became increasingly livelier, the amount of "oohs" in their music paralleled their energy levels–for better or for worse. They finished off the set with their catchiest number, "Break Myself in Two." Once you hear that song, the chords get stuck in your head for the rest of the night.

Next up on stage were the lonely, old-style country lyrics of Barton Caroll; his first number, "Pretty Girl's Going to Ruin My Life (Again)" covered any country clichés with a thick coat of Northwest ennui, a great to start to a long, tasty set. It certainly doesn't hurt that Caroll's words pile up into one intriguing turn of phrase after another, like the lines "She turned me down/said I was like Pavlov's hound." The lovely lap steel aided the melding of folk with old country, rolling both genres into one explanatory sentence; at one point during the set, Barton proclaimed, "All my love songs are about feeling inferior."

For the last set of the night, Conrad Ford welcomed us to their album release and waved at their family in the audience. Andy McAllister's voice oozed over the crowd like molasses spilling out of a bottle, it pooled in the eardrums and sweetly stuck; he sounded similar to M. Ward or a smoky Jack Johnson. When the band played "Vampires," the blended chorus "my vampires take awful long" was stretched out low and just long enough that it seemed like a tired man's sigh instead of an emo-kid's whine. Accompanying many of Conrad Ford's was a steel pedal that made gorgeous, lazily-echoed notes drift and slide into each other while wrapping around the rest of the song like a bow on a present.

Although it wasn't the most active show, the audience really enjoyed themselves; you could see whole groups pause in-between sentences to cock their ears toward the stage. Conrad Ford plays the kind of music that goes well in the background of almost anything, like drowning out backseat driver complaints, internet surfing, or muse-music while you're creating your own art.