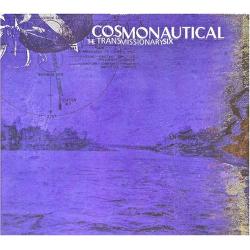 Cosmonautical, the fifth full-length release from Seattle band the Transmissionary Six, was recorded by another Seattle musician, Graig Markel, and together they've created a sound that is both warm and sprawling. A predominant alt-country sound pervades the record, though it's a murky lounge type of alt-country, very different to what most would identify with the genre. The group are heavily inspired by the late period Talk Talk and this comes across in the album's nine tracks.

Cosmonautical features lots of pedal steel guitars as well as generous amounts of reverb and echo. Punchy, fuzzy bass lines fill the backbone of songs such as "Finders Keepers," where drowning guitars and synths unroll hazily as atmospheric acompaniment. "Edison Stare" has a fifties feel to it with twangy electric guitar and blues harmonica. The chorus comes in with the clever lines, "You tell me you're on the brink of something / Sitting there with your Edison Stare."

"They Finally Let Me Drive" is a dissonant rock and roll composition led by abrasive guitars. It's the most immediate song on the record and also one of the most original, with the addition of keyboards and sampled voices in the background. Terri Moeller's sleepy vocals are almost reminiscent of Margo Timmons (Cowboy Junkies) or perhaps a female Mark Hollis (Talk Talk) at times.

The Transmissionary Six sound like they are hitting their stride on this recording. It's the composite of varying styles and instruments, a nicely accessible disc that doesn't come off sounding too radio friendly (and I mean this in a good way).