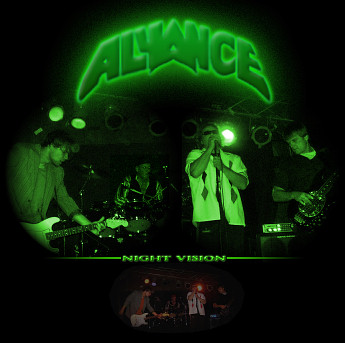 Thank you very much Craigslist Seattle! We are ALYANCE!!!! I'm not one to shoot down any local band, let alone one rockin' the Jimmy Z's scene in Everett… Let alone one with a single called "She's Hot," featuring lyrics like:

"She washes her hair in the shower
She takes about an hour
To put her makeup on
To look good.
She brushes her hair in the mirror
Ready for someone to see her
She slips her little mini on
She look (sic) good.
She's fine, she's all mine…
She's hot, she know what she got…"

But a pal brought the band Alyance to my attention; specifically, he pointed out the over-the-top, pseudo-superfan, blatantly transparent self-promotion the band has smeared all over the Craigslist Seattle and Snohomish musician listings and the subsequent hazing from other members of the Craigslist community that follows.

I'm weeping with laughing from reading these posts. And my ears are bleeding from listening to the band's MySpace page (for much the same reason).

And now — check out the hilarity as THE DRAMA OF ALYANCE unfolds!!!

Congrats to Alyance! I heard they got a record deal this week with Sony Records. Let's all buy 10 copies of Night Vision in stores soon! Have fun partying with all the hot chicks fellas. Don't let the fame go to your head. Remember where you came from (Jimmy Z's, Everett, etc…)! ROCK ON for 70 days and 70 nights guys! Go to myspace.com/alyanceband for more info!

April 21:The Low Down on Alyance –

Turns out the band had a "suck o' meter" that they were monitoring to see how good they were and it showed they did not suck at all, in fact they were as good as possible. Yesterday a very sharp friend noticed they had the meter upside down and in fact they had sucked to the maximum degree all along. This unfortunate fact broke their spirit and they all went back to their day jobs. Thanks McDonalds for your generous offer to take them back.

do YOU have Alyance hour at YOUR job??!!

Whoa, hold your horses. This is Larry Feinstein from Sony Records. You guys are reading too much into this. We did sign a few guys from the Alyance band as Janitors for our NW office but that is it. We do have a contract but it is for $8 and hour cleanup. Good deal too as they do toilets and windows.

They said something about a band they had but I wasn't paying much attention. Anyway now you know the scoop.

I'd like to take a moment to weigh in on this Alyance business that some of you feel the need to comment on everyday.

I don't know the people in this band since I tend to avoid armpits like Everett, and MySpace takes more time than I can tolerate to load on my computer, but what I will say about them is this: their tenacity puts you clowns to shame. I like the fact that they have never bothered getting into it with any of you, because they seem to recognize you for the annoying insects that you are.

The Camel had her heart set on becoming a dancer. "To make every movement a thing of grace and beauty," said the Camel, "that is my one and only desire."

Again and again she practiced her turns, her belly rolls, and her shimmies. She repeated the six basic rhythms a hundred times each day. She worked for long months under the burning desert sun. Her feet were blistered, and her body ached with fatigue, but not once did she think of stopping.

At last the Camel said, "Now I am a dancer!" She announced a recital and danced before a group of camel friends and critics. When her dance was over, she made a deep bow.

There was no applause….

"I must tell you frankly," said a member of the audience, "as a critic and as a spokesperson for this group, that you are lumpy and humpy. You are baggy and bumpy. You are, like the rest of us, simply a camel. You are not, and never will be, a true artist of the Danse Orientale."

Chuckling and laughing, the audience moved away across the sand.

"How very wrong they are!" cried the Camel. "I have worked hard. There can be no doubt that I am a splendid dancer. I will dance and dance just for myself."

That is what she did. It gave her many years of pleasure.

Satisfaction will come to those who please themselves.

Do you understand? No, of course you don't. It is not and never was about you.

I was at the Alyance website today and noticed that all of their shows have been canceled… either they broke up or they're just taking a break. What will we do if there is no more Alyance? I want some answers!

April 22: A letter to Alyance

I am writing to you in hopes to reach you before you do something drastic. I hope to God above that you aren't contemplating breaking up. The world needs the music of Alyance and you guys have more heart than 95% of any other band out there. I am an extremely dedicated fan and would seriously contemplate shutting myself off from the world if you called it quits. But, all your shows are canceled and there is no news on Night Vision. What's the deal?

Below is my hero Mike G! He ROCKS!

April 22: MY letter to Alyance.

So I actually responded to an ad when they were looking for a new guitarist. Met with the "singer". Was given a few CDs to learn the music….and was told I would be meeting with them in roughly 2 weeks.

Well….by evening 1 I had almost the entire 1st CD figured out…..Complex? Not in the least. I suck by most standards…..and this was easy shit. Good music?…..Eh…no not really….but all I wanted to do was play with a band.

Okay…I'm straying…..so instead of the 2 weeks I was told it would be….I started getting texts…..e-mails….calls day & night about gigs…going to clubs to watch them…getting together to practice…..
Fuck. My wife doesn't even communicate with me that much and she never shuts the fuck up!!!

Bottom line….you guys had/have (whatever the score is) a goal/dream. I'm sure you had or are having fun.
But for the love of all things…..You aren't all that!!! Enjoy "jamming" together
(if you still do)….enjoy the gigs (if you're still together)…..

All I ask is that you PLEASE stop adding posts from yourself/selves (pretending to be someone else) for attention….It just makes me want to hurl my lunch.

Signed,
The guitarist that told you to fuck yourselves because I had a better life.

Rock on, Alyance… I know I shouldn't reward your desperate pleas for attention, but these posts are almost as hilariously awful as your lyrics. Almost. And hey, apparently any promotion is good promotion, eh?

Oh, and if anyone knows of a cool band looking for a drummer, let me know so I can tell my pal so he can stop reading the Craigslist Seattle musicians section…