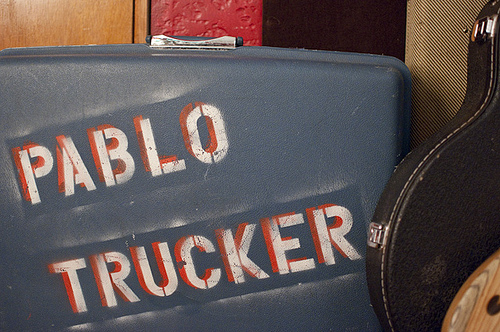 I've loved Pablo Trucker just about as long as I've been in Seattle. Literally.

Picture it: Capitol Hill, 2008. It's summertime. I've got a habit of hiding out at the back bar in Victrola during the morning, often before I head in to work at my temp agency gig. Andrew Rudd, drummer and vocalist for the band, is my faithful barista, always taking a moment to chat with me while he crafted my morning brew. One day, our conversation turns to an intriguing red flyer on the front of the espresso machine. Pablo Trucker, it claims, playing one night of a Jack Wilson and the Wife Stealers residency at The Sunset. "You should come," Andrew says to me, over the whirr of the grinders. Having never heard of the band, knowing nothing of the sound, I tell him I'll be there with bells on.

And such was my introduction to Pablo Trucker. I made my way down to Ballard that fateful Monday night, rife with apology since it was getting late, and I wasn't sure if I'd make it through the whole show. Well, I wound up fighting those dayjob schoolnight blues, staying on for the set, and the mighty Pablo Trucker melted my face off with awesome. Never in my life had I seen and heard so much coming out of two people — here's a clip from my first ever imaginary writeup:

I feel like I should have worn more layers, or prepared somehow otherwise, for what wound up transpiring. One guitar. One drumkit. Two voices, red spotlights, and enough ache to last all of us well into next year sometime. Beyond that, I don't even have any words for it, except go buy the album the minute it comes out, and go see them live next time you have the chance. Seriously. They're my new favorite everything.

Fast forwarding to this past fall: when I checked in with Andrew to see if he and Brian Wagner were up for playing our holiday show, I knew it was a shot in the dark. You see, the Pablo Trucker has been a bit dormant as of late — Kory surfaced in Pickwick, Andrew and Brian haven't done m/any shows out — a few of us had begun to wonder if Pablo Trucker was no more. Friends would tweet about how incredible a reunion would be, but no plans were laid out for a show anytime soon. And then, Andrew responded to my email with an enthusiastic "Count us in!"

Well, we've been party plannign ever since, and now that we're a day out from our Imaginary Holiday Spectacular {do you have your tickets yet??}, we found a few minutes in the happy holiday mayhem this week to catch up with Andrew about life since then, what's going on with the band these days, and more.

TIG: So, what have you and Brian been up to? We haven't heard much from the Pablo Trucker camp since that Christmas album you did in 2010.

Andrew Rudd: Brian and I have both been stinking busy! Unfortunately, there hasn't been much time for us to play music together in almost two years. But we did the Fremont Abbey's Round about a year ago, and it was fantastic! I think since then, we've both been missing it so much, and we knew we'd have to start playing shows again… eventually. I've been staying really busy with music, for which I'm grateful! I've been playing a lot with local band Cloud War and singer-songwriter J. Wong. I've also done some national tours with Rosie Thomas and Shannon Stephens. Seattle's weather (and all associated with it) was starting to get to me after 9 years here, and seeing the rest of the country again helped restore some of my sanity. But I love it here!

TIG: Will you be playing as a duo for the holiday show, or with Kory?

AR: Regretfully, Kory will not be joining us this Friday. We talked about it and he was very excited, but things have been a whirlwind for him and the dudes in Pickwick. I'm not going to give away any secrets, but those guys are doing some badass shit. They've had such a busy and amazing year, and I don't think they'll be slowing down for a while. We're really proud of them!

TIG: And what's coming next for you guys? After blowing our minds this week, of course.

AR: Ha! Pablo Trucker of the Future? I don't know what it will look like or sound like, but there will be more! Brian and I have been very clear that we don't want to back-track two years with our music, but rather play from where we are right now. There are several new songs in the works. We've both developed as people and musicians over time, and the current state of the band reflects that quite well, I think. One of the things I've always loved about this band is when things develop quickly without us second-guessing ourselves. We can just let it grow as it grows, and we want our audience to experience the growth with us. That's part of the grand experiment of it all! The art of being a band is in every moment, not just the ones that end up on a record every year or two. That said, we want to do a record and play more shows in the new year, and we'll let you know as they come together.

TIG: Any new music you're excited about these days?

AR: I'm perpetually late to the table as far as current music goes, but I love the Tame Impala record! Aside from that, this year it's been a lot of Bill Withers, Bonnie Prince Billy, and The Bad Plus. That's a lot of B's! Locally, I know way more about the folks I've been playing with: Shannon Stephens and her Fabulous Friends, Cloud War, and J. Wong, than other bands because I haven't been able to see many shows for a while. I'm extremely excited about all three groups and where they're going. I did catch the band Pollens at the Tractor Tavern a few weeks ago, and they were great! Such amazing musicians and they really had the crowd moving. I also want to mention the local band 1-2 1-2 (pronounced one-two one-two). I saw them at the Comet two months ago and they killed it! These guys have been around a while and don't get the credit they deserve. Nobody in town is doing what they do.

If I have a new year's resolution, it's to see more shows. Well that, and strengthen my core. Ha!