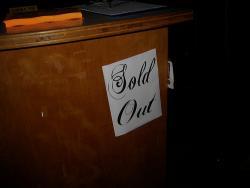 Cowboymouth and Memphis Radio Kings at the Tractor

Ten years ago, a coworker dragged me to Manhattan to see a band called Cowboymouth. He had been talking about it for weeks. I remember it like it was yesterday. "You have to come," he'd say every morning, bursting at the seams over our coffees while he played me a new track off a well-worn cd. I caved. And walking into Irving Plaza a few nights later, everything he promised me rang true before the band even started. There wasn't a free square inch in the place, and the room had this tangible thing to it — that same beaming, child-like, anticipatory glee that he had been bringing to my desk all week. It was unreal.

And when the band finaly came on, I thought the room was going to shake apart from the thunderous applause and foot-stomping. Hailing from New Orleans (before it was a thing to hail from New Orleans), a heavy-set barefoot drummer / lead singer in a sleeveless Superman t-shirt began to serenade us. Slamming the shit out of his drumkit and talking about radio heartache and hurricane parties. The girls all swooned, and the band was powerful. But beyond that, what got to me even more was that… thing, the thing that the audience had. People crouching on the floor as if on cue, singing along — and I'm not just talking about Front Row Freakout Dude. I'm talking about everyone, from the Dude to the people four rows behind him, to the couple wedged in the back corner of the room. For these people, it was church, and release, and everything, all at once.

So when the listing surfaced for their show at the Tractor this past Monday night, I knew I had to go, if only in honor of that great night. I walked up to a sold-out sign at 9:15 (!!!) and caught the end of the Memphis Radio Kings (who had started a bit early, but did a stellar couple of songs that I managed to catch). Between sets, well, you would have thought we were in… I'm not sure where. Not Seattle. Definitely not Ballard on a Monday. There was joy, and comraderie, and dancing. Dancing! There was even sing-a-long to Sweet Caroline. The opening strains of a Who song snuck through the speakers, and that same explosion from that night in Manhattan shook the room as Cowboymouth came on stage.

The way this band gave it to the crowd — I'm blushing just remembering it. A few of us stood there side-stage, aghast, yelling to each other about it over the full-force snare drum and the deafening roar. We couldn't believe it. One person (whose identity I will take the time and space to protect) leaned over and shouted, "I know! Look at this! It's like, Barenaked Ladies or something! In a good way!" We both laughed, and kept watching, and a minute later I looked over at him.

"Don't worry," I shouted. Grinning. "I won't tell anybody you said that."

More photos, and a little video to prove it all happened, in the TIG flickr pool. Woo! And you can catch Memphis Radio Kings doing a full set on the 29th, at High Dive. See you there!