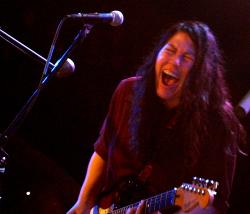 The Breeders at Neumos: Smiling will make you happy

My face hurts from smiling and I blame the Breeders, who turned Neumos into a huge sweaty living room Tuesday night.

Waiting strangers chatted and a large audience gathered early. Opening bands Panda & Angel and Black Whales warmed the venue and the crowd that pressed in as the Breeders took the stage.

The Breeders smiled a lot.

The band interacted like family (duh) and treated us like family too, bantering with front-rowers, joking about rehab, talking to fans they recognized, and sharing those contagious smiles.

I last saw the Breeders live at Lollapalooza 1994, where they played with a stellar lineup and kicked Smashing Pumpkins' ass.

I remember them more moody and brooding then, though it has been almost 15 years and I was… altered at the time. There was a lightness to tonight's show that was unexpected and it just was so much fun! I had a great spot at the stage and hung out with some younger fans, swapping show stories between sets.

The music sounded much the same as it did in '94, punching just as hard, as I knew it would. It's risky, seeing a beloved band from a bygone era. Will they suck now? Have they gone soft and written boring songs? Did I just not realize before that they always sucked? I haven't kept up with the Breeders since our last encounter and still bought my ticket without hesitation before listening to their new album.

The Breeders are incapable of being anything other than engaging and their songs swung and swooped in the catchiest way. "No Aloha" and "Pacer" were knocked out of the park, and I realized as Kim stepped up to that "Cannonball" mic and started in that she was having a blast. You can't fake that.

New songs were interspersed and fit alongside the classics. Kim and Kelley Deal are intriquing vocalists and history alone (The Pixies, The Amps, The Kelley Deal 6000) was worth the price of admission. When you throw in genetics, talent, and a great band, the Breeders whipped up something delicious.