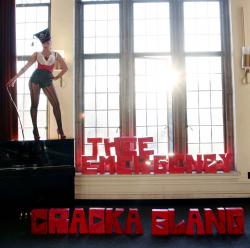 “Cracka Slang” was the song you may have heard U District-based female-led psych-soul rock band Thee Emergency perform in MTV’s $5 Cover Seattle, looking as sizzlingly stylish and sweaty as hell as on a great night at a small club as they always are — and if you haven’t seen Lynn Shelton’s band documentary yet, go do that somehow.

Meanwhile, you’ve probably been wondering what Zana “Dita Vox” Geddes, Matt “Sonic Smith” Bracher, Tom “T. Drummer,” and the rest of the band has been up to since their terse debut Can You Dig It? and psychotically expansive sophomore Solid swayed heads and music junkies since they gummed up and acid-overheated CD players all over the region for the past couple years.

I have The Answer: A 12″ piece of golden vinyl (yes, color gold) with a download for whatever electronic device you use to not play your damned vinyl, fool. And it too is called Cracka Slang. And it is one of my albums of the year. 13 tracks, featuring sometimes tender, sweetly intimate soulful ballads (the long time woman, song of the year “Feelin’ Long”) stomped with silly bluegrass novelties (“Boot on a Log on a Concrete Floor,” ?!) and souped up with topical, tropical singalongs (“For The Love Of Phil,” dedicated to shrewd legend and Cracka Slang Executive Producer Phil A. Peterson).

The Heavy Soul don’t sound too heavy here in production, in fact, the fly by breezy and sound made with lots of laughter and love like the results a happy-stoned just-right warm afternoon. Snug folk-rockers and roaming experimental loops co-exist as political discussions (the utterly destroying political anthem “American Man”) and chilly relational confessions (“Revolution in French”). It’s all too much, and I mean in that in exactly all the right ways.

There’s strings, keys, shit-kicking feminist raves, and ontological anarchy from the wicked dedication to failure at the top (“Standing Line”) through the transcendental closer “Oh Kyle O’Quin.” It is just as classy and candy-colored as a homage in a European cabaret freak out, or a 60s Broadway hit play, but it’s all real rock and roll, no matter what genre is quick-tickled like a nipped-out kitten.

Dita Vox has a voice to die for, especially on the protest beast “American Man” and the ballads (really great ballads! The best you’ve heard since People Eating People!). BUT she says this all can’t be duplicated live, so catch this roque-popera now whilst you can, and be prepared as the band is right now this very moment burning up some two inch reels with another rock madness soul apocalypse to officially follow up the smashing Solid. That’s the news, now settle in for some late summer punk-blues in some thrift store try-on songs you won’t quickly forget.