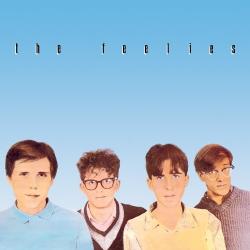 As their first salvo, “The Boy with Perpetual Nervousness” summed up the Feelies succinctly. The opening wood-block clicks, the ensuing chatter of percussion against the jangly guitars, and the jittery pace announced something otherwise unheard before. Yes, Crazy Rhythms, the New Jersey quartet’s 1980 debut, sounded like the Velvet Underground, but with everything sped up. They sounded nervous, twitchy, and that impression carries still across the whole of Rhythms, now in its gatefold, slender cardboard reissue from Bar None. Never mind the typical trappings and dressings: The Feelies didn’t supply a raft of extras, sticking to the debut’s 9 tracks and their angular rushes that seem largely irritated by constrictions. It’s curious how the band – Glenn Mercer, Bill Million, Anton Fier, and Keith DeNunzio – actualized their irritations. They clip rhythm guitar against an occasionally flaring lead guitar on “Loveless Love” and then lace in languid vocals with whole minutes elapsing with just drums, no cymbals. And if all else fails, their agitated take on “Everybody’s Got Something to Hide (Except for Me and My Monkey),” is for the ages, claustrophobic and manic.

Five years on, with sundry Feelies offshoots all over the Jersey/NYC area, The Good Earth popped up as the band’s sophomore effort. Mercer and Million returned with a new rhythmic core, this time consisting of a drummer (Stuart Demeski) and full-time additional percussionist (Dave Weckerman) along with new bassist, Brenda Sauter. The air was simpler, less exclamatory and even a bit rural (get it, The Good Earth?). And while the drumming still eschews splashy cymbal bursts and emphasizes snare/tom-tom simplicity, the Feelies’ guitars are more Velvety, slower in parts and better-rendered overall. They hadn’t been tamed since 1980, just calmed. While Million plays long rhythm lines, for example, Demeski offers staccato strums on the opener, “Slow Down,” creating a fidgetiness offset by the once again slow-go vocals. What pops here again are Mercer and Million’s phenomenal guitars, jangling and cutting against methodically simple drumming, unhurried vocal narratives, and a sense of song structure that makes for slow with dizzying effect. Identically slender in its gatefold sleeve, Good Earth returns here like Crazy Rhythms, unadorned and un-expanded, putting the music more emphatically forward – and far more successfully than so many other bloated ‘deluxe editions’ that just take away from the original album experience.