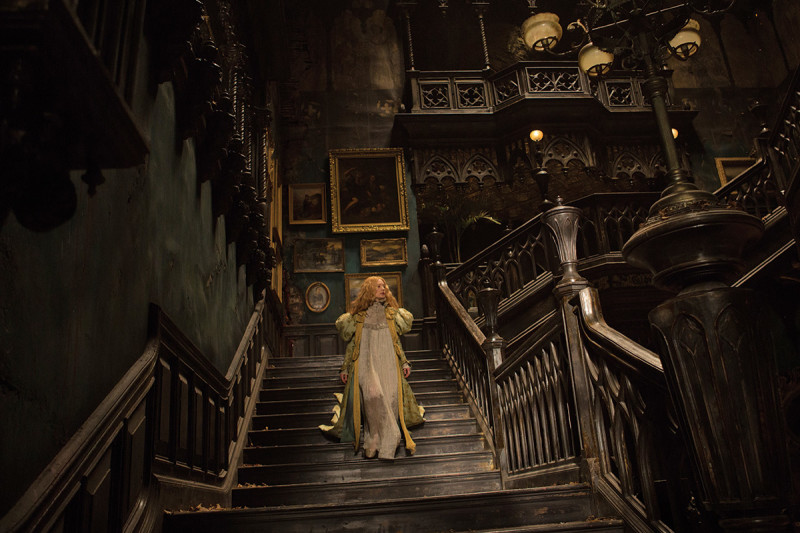 oh.my.god. It’s like Guillermo del Toro reached into my brain and pulled out the perfect nightmare marriage of everything I love and fear and then plopped it on screen in a Victorian Gothic wrapper: A forbidden romance. A murder. A giant, crumbling old mansion. Mysterious family secrets. Really frightening ghosts. And, of course, lots of gruesome gore.

Crimson Peak begins at the end, and pulls us back into the story via narration of its main character, Edith Cushing (Mia Wasikowska). Having lost her mother at a young age, Edith is devoted to her father and is focused more on becoming a writer than on becoming a wife—until the handsome Baronet Thomas Sharpe (Tom Hiddleston) appears on the scene and woos her with exactly one waltz, much to the ire of his gorgeous yet creepy sis, Lucille (Jessica Chastain, clearly in the role she was born to play).

When her father’s objections to their relationship are met with a tragic accident, Sharpe marries Edith and whisks her off to his estate, Allerdale Hall. Welcome home, Mrs. Sharpe. Pay no attention to that GIANT hole in the ceiling, or the fact that the house is sinking into a huge, oozing red pit of clay, or that the snow turns red like blood because of it. And especially ignore those screeching, horrible spirits skittering around the house. NOTHING TO SEE HERE! Move along.

Not long after arriving, Edith starts noticing strange things afoot that coincide with both a sharp decline in her health and Lucille’s more and more erratic behavior. Of course, being a mystery writer, she’s gotta investigate, even if that means taking the falling-apart elevator down to the level she’s been directly told NEVER to go to. Huh.

I don’t think I’m giving anything away by telling you that the plot of this film isn’t complicated and that the acting and dialog verges on over-the-top—oh alright, sometimes it pushes right past verge and leapfrogs a 1000-foot wall, but that’s part of the charm of it! That plus the incredible sets and mind-blowing costumes mean I could watch this film over and over and for hours and never get tired of it.

I unapologetically LOVE Crimson Peak for everything that it is … yes, even Charlie Hunnam as Edith’s sad-eyed, shafted suitor. Incredible, I know.

{Crimson Peak opens in Seattle on Friday, 10/16 and is screening at AMC Pacific Place, PACSCI IMAX®, and Thronton Place Theaters}