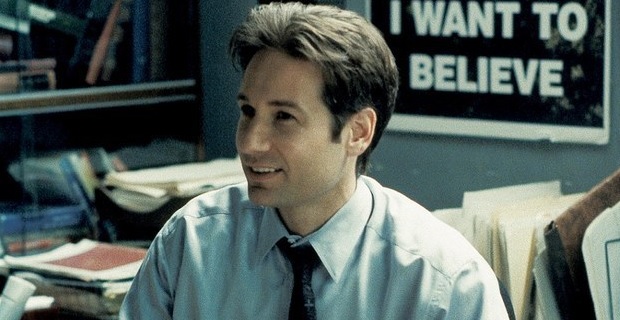 You know how sometimes thinking about one song which had a huge impact on you leads to another song, and another, and another and they’re all linked in some weird way? My brain went down a 1990’s rabbit hole of songs related to movie and TV stars the second I was reminded of this gem:

“Watching the sky for a sign, the FBI is on my mind
I’m waiting for the day when my lucky stars align
In the form of … David Duchovny floating above me,
In the alien light of the spaceship of love”

David Duchovny, Why Don’t You Love Me? by Bree Sharp
All the excitement over The X-Files reboot caused my memory to auto-play Bree Sharp’s 1999 plea to Mulder David Duchovny, which my friend Jen and listened to approximately one million times because, SHOCKER: we were in love with David Duchovny {hand up if you obsessively watched Kalifornia, Playing God, and The Red Shoe Diaries just to gaze into David’s gorgeous abs. I mean face! FACE … no? just me?} too. We also watched the video for it every single chance we got—not an easy feat in the pre-YouTube era internet.

The music video is a who’s who of 1990’s TV, with a studio lot view of cast and crew from The X-Files (keep your eye out for a young Vince Gilligan!) and other ‘90’s stars. My personal favorite: Sarah Michelle Gellar as Buffy, reciting the pivotal “I’m gonna kill Scully!” line while she mimics slaying with Mr. Pointy. Also: Jerry Springer, Brad Pitt in Tyler Durden form, KISS (!?!?) and … some girls from VIVID. Yes, those girls from VIVID. Make sure you watch through the end credits!

Spin the Bottle by Julianna Hatfield Three
Ahhh, Reality Bites! I hated this movie when I first saw it because Troy (played by Ethan Hawke) was just way too close to the boy I had dated previous to the film coming out. Like, way too close. Like, whoa. But I always loved the soundtrack—and in particular, this fun little pop song.

Back when this song was released, rumors swirled all over MTV {at that time, MTV was the only legit news source that teens cared about} about how in addition to the video featuring Hawke, the song was actually about him because he and Hatfield were dating/had dated/dramatically broke up/were spotted at The Viper Room making out … take your pick. The only thing I can find on the world wide interwebs about it now was that they were neighbors, but I’ll choose to hold onto those remembered rumors if only because it makes this set of lyrics so much more hilarious:

“He’s in a bunch of movies, really stupid movies.
It’s not entirely his fault, he can’t control it all”

Jason Lee by All Girl Summer Fun Band
I wish there was an actual video for this song! Because: GAAAAHHHHHH JASON LEE. All Girl Summer Fun Band didn’t exist in the 90’s, but they recognized how awesome Jason Lee was and wrote this song about him in 2003 {right when his movie career got uh … interesting). Sure, the guy played some of the most obnoxious characters ever but he was also cute as hell and he also knew how to rock a skate board. Plus, if you’ve never seen Kissing a Fool you’re missing out on sweet, romantic lead-mode Jason Lee. BE STILL MY 20-SOMETHING-YEAR-OLD HEART.

“I couldn’t sleep last night, I turned on the TV
It was one of those late-night talk shows
And sitting there with Carson D., slagging MTV was
Jason Leeeeeeeeeee, doing kick flips in my dreams, Jason Leeeeeeeee”

“I’m gonna pick up some beer, stay at home
And stare at my Clare Danes poster
She is so bitchen; she always listens
She never tells me I’m a loser, loser”

Anything I missed that you know about? I’m deeply disappointed no one ever wrote a song about Keanu Reeves … oh. Shit.