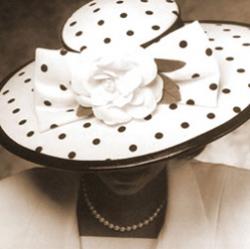 The Intiman opens its 32nd season with this well-staged and surprisingly soul-stirring look at the cultural, religious, and symbolic importance of hats.

Don't ask me how, but this works beautifully. Perhaps we can attribute the fantastic directing skills of Jacqueline Moscou (regular helmer of Intiman yuletide staple Black Nativity). Or actress/author Regina Taylor's sparkling adaptation of the photo/interview book Crowns: Portraits of Black Women in Church Hats. Or the wondrous blues stylings of musician Bill Sims, Jr. Or the uniformly incredible performances (both musical and dramatic) by every member of the cast.

Crowns is joyful in ways It Ain't Nothin' But the Blues didn't quite achieve, and it made my spirits soar almost as high as the next thing you're gettin' ready to read about.

The incomparable Carlotta Sue Philpott moves downstairs to the NWAS mainstage for a springtime Wing Ding run. The larger space is a bit less intimate, but the merrily cornball Southern hospitality is in full force: at a recent performance, Carlotta's freaky son Slaw even distributed shawls to the audience for, as he put it, "the nice homey touch. Just like if you was gettin' touched at home."

Nellie Murphy tottered around pre-show with the hem of her skirt caught in the back of her bloomers, Terry Gladwell wore an obviously stuffed thong, and the music-and-dance opener was worst song ever "We Built This City". Other highlights of this Mother's Day Weekend edition:

It's crazy homespun comedy perfection, and at least as good as every other Wing Ding performance I've been fortunate enough to witness. This will likely be the last run before Christmas. Don't miss out.

Currently in Carlotta's regular space is Train of Thought, a standard-issue sketch troupe that, frankly, pales in comparison to the sublimely wacky Wing Ding gang.

Performers John Boyle, Ryan Miller, and Celene Ramadan begin with a key word (in this case, "New York"), then use related words/phrases to inspire individual scenes about such delightful topics as transient prom dates, a restaurant with endangered creatures on the menu, and diseased scrotums. Like SNL, it's full of good ideas that only occasionally pay off, and there's a giggle or two to be had. But Miller is no Jimmy Fallon, Ramadan is no Maya Rudolph, and Train of Thought is about a hoot shy of a hoot and a half.