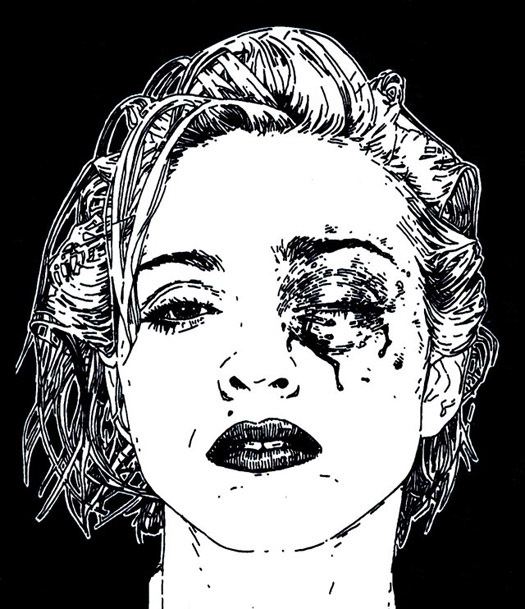 This has been an interesting story and it finally has a happy ending.

Here's how I understand it: the 8-bit electro goths from Crystal Castles found an image of Madonna with a black eye. They used that image for t-shirts and put it on an album cover and said they did that so that they could find the artist and compensate him or her for the use of their art. The artist turned out to be the notorious Trevor Brown. The band and the artist may or may not have reached an agreement that would pay Brown for the use of the image.

Then Brown never saw any of that money and Crystal Castles prior management were being dicks about the whole ordeal.

Finally, though, there's a silver lining with Pitchfork reporting:

As Brown tells it, things got a whole lot more genial between the two parties once Supervision Management took over the band's worldwide management duties. Supervision sent a letter to Brown on behalf of the band, apologizing to Trevor for the crappy treatment he received from a number of the Castles' handlers. Supervision also offered to buy the rights to the drawing from Brown. With what Brown calls "no muss no fuss," the Castles secured the rights to Madge.

Brown will apparently retain reproduction rights, but the image otherwise belongs to the band. As Brown notes, "the black eyed madonna is now officially and legally theirs, to do with as they please…at least until maddy herself files a lawsuit, ha ha!" So this isn't over, then.

A rep for Lies Records confirmed that Brown was paid, noting "an agreement was easily made" because "Trevor gets along with [Crystal Castles'] new management." The band's own Ethan Kath echoed the confirmation, writing, "It took us a while to build up our collection of pennies but we finally saved enough money to pay the man who drew the image which we have adopted as our logo."

With this issue being resolved and the band's plausible explanation for the accusations against them by some 8-bit artists for allegedly violating the Creative Commons License, I think they've put all of the thievery accusations behind them. Finally.

Crystal Castles plays in Seattle next on October 28 at Neumo's.

Here's a video to "Alice Practice":