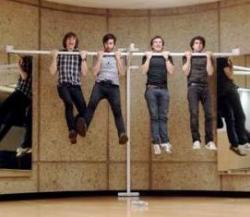 Listening to them on record, Canadian indie rock band Tokyo Police Club sound like they'd be the quintessential live act —  all of their songs are upbeat, catchy, and oftentimes so fast that they're over in under 3 minutes.

Thus I was hardly surprised at how much fun their set at the Henry Fonda in Hollywood last week turned out to be, although the band played the songs fairly by-the-numbers and didn't stray too far from the recordings.   The only exceptions to the rule were "The Harrowing Adventures Of…" and "Listen To The Math," 2 tracks from this year's completely amazing (IMHO) Elephant Shell.  Lead singer/bassist Dave Monks, clad in a vintage Ghostbusters t-shirt, donned an acoustic guitar to play the former; it was a welcome interlude after about 40 minutes of non-stop rock.  The band also played an extended intro to the lilting, slower-paced "Listen To The Math," rather than diving right into the first verse.

I expected a mosh pit to form, or to at least see some movement in the crowd, during "Nature of the Experiment," the band's most well-known song from their debut EP A Lesson In Crime — but the audience stayed fairly tame throughout the entire set.  This didn't stop keyboard-player extraordinaire and resident band spaz Graham Wright from flailing around on every song as if in the throes of an epileptic seizure, providing the most awesome spectacle of the evening.

The band played all of their songs extremely tight, with the house light show matching up perfectly beat for beat, changing from an eery blue to electric pink in a matter of seconds.  They ran through all 11 songs from Elephant Shell, plus the ones from A Lesson In Crime before closing with the rowdy "Cheer It On" as an encore.

Bottom line –  After falling in love with their record and seeing them live twice, it's still hard to say no to Tokyo Police Club.