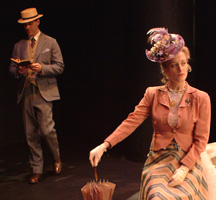 f you didn't catch ACT's highly-praised The Pillowman, you probably missed our city's best theater offering of the year. But a bright and cheery springtime in Seattle finds the Intiman beginning a new season, the Rep and Book-It ending theirs, and a typical mishmash of fringey stuff on the Hill. Assuming you're about to tire of mild sunshiny weather, I know of some theater offerings that you may want to seek out … and at least one to be avoided at all costs.

To regular readers of my stage reviews — and you are legion — it will come as no surprise that I consider the latest Book-It offering to be the best of the bunch. Seattle's smartest troupe rarely fails to deliver the goods, and their new adaptation of Edith Wharton's The House of Mirth has the smart material, fantastic acting, and expert staging we've come to expect.

As usual, every inch of the intimate Center House Theatre stage is utilized; this time an elegant raised circular platform is the (often stunningly) versatile focal point. A lengthy act 1 is action- and character-packed, and there's really too much remaining material for act 2 to comfortably cover. But seasoned director (and company co-founder) also shine in a host of multiple roles. Jane Jones is more than up to the task, and any keeping-up challenges we face are rewarded by a heartbreakingly lovely Lost in Translation moment in the bittersweet final scene. Be sure to bring a Kleenex handi-pak.

And you may need to keep those tissues close at hand for the Seattle Rep's season finale, a stage version of Mitch Albom's memoir Tuesdays With Morrie. I went into this thing with pretty low expectations, because, well, what's the point? I mean, the book was a ridiculous success in the mid-late 90s, and the TV movie with soon-to-croak Jack Lemmon in the title role was heavily promoted and highly rated. So hasn't Albom squeezed every last possible bit of juice outta poor old Morrie?

that makes it so. He inhabits the ALS / Lou Gehrig's-stricken Morrie with such power and sassiness and sprightly zest that you forget the potential cheesiness of his wisdom-heavy weekly visits from a former student (Guess not, because the play (adapted a few years ago by Albom and Jeffrey Hatcher) has become a regional-theater favorite across America. Yes, I was sneering as I typed that factoid, but forget my jadedness: this production is really quite good. And it's the triumphant title performance by Alvin EpsteinLorenzo Pisoni, who holds his own as Mitch).

This being a Rep show, the set is marvelous: a deceptively simple wooden platform melds into a matching backdrop and, with most impressive tech panache, becomes multiple locations and a lovely autumnal vista at the conclusion. That and Epstein make me not hate myself so much for being moved by the pithy sincerity of the lessons Morrie teaches (forgive/forget, shower your peeps with love, live each day to the fullest). As with Mirth, I laughed a lot, and didn't quite cry at the end… but my theater companion sure was misting. And I heard audible sniffles elsewhere in the audience. So I'm not kidding about the Kleenex.

And don't put 'em away just yet, because the next item may conjure another kind of tears. Another two-man play, Intiman's season opener Rounding Third features Richard Ziman (pretty good) and Michael David Edwards (not so good) as a little league coach and assistant coach, respectively. Each has an unseen son on the team, and each has a different philosophy toward sportsmanship — Ziman pushes the team to win win win, Edwards encourages the boys to enjoy the game and create memories that will last forever and ever. Unlike Morrie, it surpasses its full corn potential.

I did chuckle a few times, mainly at blustery Ziman, but I still long to reclaim the two hours I spent with this calamity. Before I dismiss it completely, though, I'll grant two things: 1) the audience ate it up, and 2) in general, plays about sports tend not to interest me much (unless they feature nude locker-room soap-ups, of course, and thank goodness this one doesn't). Bottom line, if you're into predictable father/son baseball-themed dramas with rickety staging and dialogue, then, Lord help us all, Rounding Third is all yours.

Last, but certainly not Third, is Atlas Theatre's The Swan, at Northwest Actors Studio through this weekend. The play, by Elizabeth Egloff, is about a fantastical creature (Bill, the titular swan, in the body of human actor Lyam White) and a dysfunctional couple — ridiculously flaky Dora (Beth Peterson, in Jane Fonda mode) and married milkman Kevin (Dennis Kleinsmith, who hopefully gained more confidence in the role after opening night) — brought together via a dull thud of magical realism.

White is always watchable as Bill, and he brings a funny and elegant physicality to the role of a waterfowl, but something is lost once the swan starts walking upright, wearing human clothing, and learning English. Don't ask. The play would have been much more palatable at about half the length, because Egloff does tend to spread silly Dora's self-imposed agony a bit thinly.