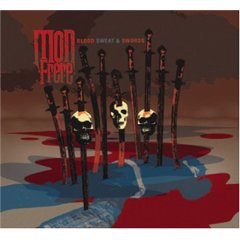 I have the tendency to think about life in terms of a number of self-made reference points. As my friends can attest, one of the most prominent is, sadly Buffy the Vampire Slayer. Yes, that classic TV show has a profound effect on the way I perceive a lot of things. Case in point: Mon Frere are the musical personification of Faith, the rogue slayer. Like Faith, Mon Frere is seductive, sinister, rough around the edges, but with an undeniable, vixen-like allure. You're not quite sure you can trust them for fear of your life. They both seem to be the types that might, in a fit of passion, either stake you through the heart, or drag you down into bed with them. Mon Frere's first proper album Blood, Sweat & Swords even has a title that is downright slayer-like, and for the most part, it's truly, well, five by five.

Mon Frere was called by the powers that be last year onto the Seattle music scene with their EP Real Vampires (See? What did I tell you? They're totally slayers). It was five songs of supernatural power that kicked the crypt door down and dusted many a listener. Blood, Sweat & Swords lacks some of the gravestone-busting intensity of the EP, but what is lost in raw power is gained in a more polished and mature sound (Giles would be proud).

Mon Frere's power is evident right off the bat with the oddly carnival-like intro for the opener "Y.M.M.W.D.S.B." The keyboard sounds slightly off, but then it swirls into thundering guitar and drums as Nouela Johnston snears, "You make me wanna destroy something beautiful/you make me wanna curl up in a ball and die." This combination of great keyboard and grinding rhythm is when Mon Frere works best, like on "You Don't Mind," a track with a frantic pace evocative of Pretty Girls Make Graves or Denali (and Faith would be proud of Nouela proclaiming, "And now my only protection is a dagger strapped to my leg just in case I get in a fight."). Handclaps delicately balance the anger, and the irrefutable catchiness that make you realize how much fun she probably has in the fight anyway. Mon Frere veer into Faint territory when the keyboards add a little more reverb; "Look at the Cash" has that neo-New Wave thrall working in full force. "Clever Boi" can be forgiven for (I hope not) borrowing from Avril with the churning chorus leads to Nouela taunting her victim "They have to beg to save their lives."

The ballads on the album both work surprisingly well, dripping with a seductive drawl, especially in the closer "Harsh Winds." It comes across as a combination of Letters to Cleo and PJ Harvey (from the Rid of Me-era) and sounds like a song that would bring the crowd to its knees as Mon Frere takes on the demons in the dark of the night. "Leaving Town" starts with piano that sounds disturbing like the end music for the original "Incredible Hulk" TV show, and this melancholy mood drives what is Mon Frere's most tender song (so far in their young career), only for it to take off at the end into a feeding frenzy of keyboard and drums.

The only times that Mon Frere gets into trouble is when they sound too conventional. On tracks like "Drain" or "BigShot" they almost sounds like a cheap knockoff of the Yeah Yeah Yeahs or, even (gasp) No Doubt. These songs seem to lack the same sinister growl that drives many of the gems on the album. "Let It Bleed (Teen Wolf)" doesn't seem to ever get off its feet, although any reference to the Michael J. Fox classic is appreciated. The same might be said for "Bulliton," which starts off with a promising thumping beat and handclap that works itself into a keyboard line, but then it seems to lose the urgency that the beginning implied were coming. It's as if the slayer is going through the motions to pass the time. It might be a sign of inexperience, but as Mon Frere mature, they too will learn that it's only the mission that matters.

Blood, Sweat & Swords is an exceptional first full-length from one of Seattle's next wave of bands. They're only beginning to discover the powers they have, only touching the surface of what their potential might be. There's something irresistible about the reckless abandon with which Mon Frere tackles their craft. Sure, they could take it down a notch, they could be more disciplined, but what's the fun of that? Faith would be proud.