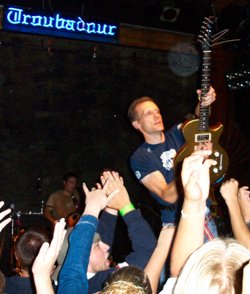 Dave Dederer of the Presidents of the United States of America

TIG: What is your favorite coffee drink?

Pres. Dave D.: My ideal coffee experience is an espresso with one sugarcube downed while standing at the bar of any number of Parisian cafes. Any one of the legendary cafes on the Boulevard St. Germain on the Left Bank would be fine. Le Pichet is my choice in Seattle.

TIG: Rumor has it that the Presidents dig the karaoke… have you ever karaoke’d your own song?

Pres. Dave D.: I haven’t, but I know Chris did “Peaches” once in the bar at Sunset Bowl. This was before we got back together again, and he told me he had to read the teleprompter because he couldn’t remember the words. And no one knew who he was.

TIG: Do you have a favorite karaoke place in Seattle?

Pres. Dave D.: My favorite karaoke experiences of the last ten years have all been at the annual PopLllama Records Christmas party, which hasn’t happened for the last couple of years. Conrad Uno used to rent out a bar for the night and bring in a karaoke machine. Karaoke with a roomful of drunk musicians is pretty good stuff. Eddie Spaghetti is really good. He does a killer version of Merle Haggard’s “Mama Tried.”

TIG: What bands / albums are you listening to now?

Pres. Dave D.: Let’s see…that’s a tough one, as I rarely sit down to listen to music in a purposeful way these days. Aside from feeding my burgeoning interest in classical music with stuff from all across the board, I’ve been listening to a few old favorites in the last month or two, mostly stuff I didn’t have on CD and just bought again: The Rolling Stones’ “Some Girls,” Willie Nelson’s “Stardust” and Joe Pass’s “Portraits of Duke Ellington” have all been in rotation. Therapeutic music. If I want something to inspire me as a guitar player, all I need is one track: Roy Buchanan’s live version of “Hey Joe.”

I haven’t heard much brand-new music in the last ten years that has really blown me away. A few titles that come to mind: the Supergrass debut, The Flaming Sideburns “Save Rock and Roll” and the Andre 3000 half of the last Outkast record.

As far as hipster/local stuff goes, I really like that last Long Winters record and also a record by little-known band Juke. I think Darren Loucas, the guitarist and singer from Juke, is the most exciting musician in the city.

TIG: When you did your recent Showbox series, you had three really great “under 21” bands. Are you committed to the all-ages scene in Seattle?

Pres. Dave D.: It’s not a crusade for us as a band or as individuals, but we’re interested in doing what we can to support an all-ages scene in Seattle. When we were younger and underage (late seventies and early eighties), there was a pretty thriving underground all-ages scene. I regularly saw bands at the HUB ballroom, Roscoe Louie Gallery, Graven Image Gallery, Ground Zero Gallery, the Metropolis, the Grey Door, the Meat Lockers and a whole bunch of other spaces. That scene was largely driven by Larry Reid, and he deserves a lot of credit for fostering what would eventually become the Seattle music and style revolution of the early nineties. Spaces where you could put on shows were cheap and easy to come by. It’s much harder to make that kind of scene work when real estate values skyrocket, as they did in Seattle in the nineties. We used to rent a hall or use some funky gallery space in Pioneer Square and put on a show. I’d like to see that sort of think happening again. The Vera Project gives me hope.

TIG: Tell us about the birth of the basitar and guitbass.

Pres. Dave D.: Chris used to be in a band in Boston with the late, great Mark Sandman, frontman for Morphine. Chris had already started playing a four-string guitar a lot of the time, and Mark had developed a distinctive musical vocabulary with the two and three string sorts of instruments that we use now. Mark and Chris used to do these jamming gigs at small clubs in Boston, where Mark would show up with a few of his strangely strung instruments, hand one to Chris, and they’d drink some beer and go at it all night, making up songs onstage for hours. Those jams provided the inspiration for new songs and, ultimately, for the Presidents.

Chris and I had already been playing together off and on for ten years when we started the Presidents. In 1993, he gave me a cassette with some new songs I really liked, and they were all done on these two and three string instruments. I picked it up because using these instruments was the only way to make the new songs work.

TIG: Are there any other bands you are excited about seeing at Bumbershoot?

Pres. Dave D.: I’m excited to see Death Cab. They’re on right before us, and I’ve never seen them play. Other than that, I have no firm plans. My favorite way to go to Bumbershoot is by myself with no agenda — I like to wander around and catch little bits of lots of shows.

TIG: How do you think the local music scene in Seattle has changed from now and 1995?

Pres. Dave D.: It’s much broader and deeper than ever, but I also think it’s a lot less distinctive. The emo thing is a good example. Seattle is home to many of the genre’s most respected bands — I think you can pretty easily argue that Sunny Day Real Estate were the key band in the birth and development of the style. But there’s nothing distinctly Northwest or Seattle about these bands. You can go to any town in the country and find these emo bands that all sound pretty much the same, and they all dress the same with the foam trucker caps and fake thrift-shop short-sleeve dress shirts from Urban Outfitters.

That was not the case in the eighties and early nineties. “Grunge” eventually was co-opted by the entire western world, but that attitude and look were something that was completely Pacific Northwest. The logger-meets-downtown-anarchist-bohemian thing at the center of the look (flannel shirts and pants cut off just below the knee are standard logger moves), attitude (“Fuck you, I’m trying to read this Sartre essay”) and sound (garage rock on acid) was deeply rooted in NW history. That scene was defined by an ethos that integrated essential elements of NW life from the last 100 years: woods work, liberal politics, rainy days with nothing to do other than drink beer or coffee, and the music of The Sonics and Wailers. We’ve lost this provincial flavor.

TIG: Has your success changed your daily life?

Pres. Dave D.: I assume you mean financial success and whether having made some decent money has changed my daily life. We were lucky to get the chance to make some money and smart enough not to put it all up our noses or squander it in other ways. But we’re not filthy rich. If wanted to make a lot of money I would have been much better off going to work at Amazon in 1996 or getting an MBA. Many of my friends from high school have made and continue to make WAY more money than I’ve made as a rock star.

Success is not about the money, anyway. Success for me is living
a productive life in a manner that honors my personal values. Success is living with integrity. Making lots of money and having a lot of people think you’re really cool does not help with this. In fact, I would say that material/media success is a dangerous roadblock if you’re trying to live with integrity. If you have a hit record and everybody around you is telling you how great you are all the time, it’s pretty tough to maintain perspective.

TIG: Given your celebrity-status, do you find it easier or more inconvenient patronizing your favorite restaurants, book stores, etc.?

Pres. Dave D.: It can be one or the other or both at the same time. Sometimes I get treated extra-nice at a favorite restaurant or at a music store. And I have never been hassled or overwhelmed by people wanting to say hi or get an autograph, except for about a year when we had a really huge hit record.

But there’s always an exchange as part of getting treated well — people expect an extra bit of small talk, or they want to get you to listen to their nephew’s band’s demo, or they want to get their picture taken with you. I did have one really horrible moment at a cousin’s wedding when some distant relatives were trying to have their photo taken with me during the wedding ceremony. That was a bit much.

TIG: Do you have a rider? If so, anything in particular that is a MUST!?

Pres. Dave D.: Yes, we have a rider. Yes, there are a few items that are absolute musts. Three things we couldn’t live without, in reverse order of importance: lots of towels, lots and lots and lots of water, and one bottle of Bushmill’s Irish whiskey.

I don’t drink much of the whiskey, but it’s an essential part of Chris and Jason’s pre-show routine.

We don’t ask for anything too weird. Organic whole fruit, some chips and salsa, a couple of daily newspapers (local and NY Times). The newspapers are a good recent addition. There’s a lot of hurry up and wait in the rock and roll biz, and it’s nice to have something to read when you’re waiting around for soundcheck or the show.
To mark the release of “Love Everybody”, the new album by the Presidents of the United States of America, TIG is pleased as lynchburg lemonade to post a recent interview they conducted with Dave Dederer, Presidents guitarist. A long time musician and Seattle-ite, Dave has an interesting take on the birth of emo and the meaning of success.

TIG: Did the political climate this year affect your decision to release a new album or the content therein?

Pres. Dave D.: It didn’t change the record-making process at all. That said, we’re getting involved in partisan politics for the first time ever as a band. We’re doing a fundraiser for Kerry in late September. And I heard Chris say something sort of nasty about George W. Bush from the stage just this evening at our show in Anaheim.

TIG: Which of the three imaginary girls is the most “lump” and why?