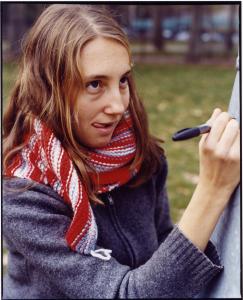 Khaela Maricich of The Blow

So, you're going to be in our interview section, which is called "Coffee With A Rock Star."
Rock. Wow. I don't even know what rock is.

There's a dog on the cover of your new cd, The Concussive Caress" (K). Dogs are cool! Tell us about the dog.
I was at my friend Sarah's house, she's one of my best friends. She's from Spain. We were going to go out somewhere, and she was trying to get me out of the house. She held up the corner of the bed, trying to get me out, and when she did she revealed this stack of photographs. Sarah made a little treasure hunt for me! The last photograph in the stack was this photo of a dog. I looked at it and thought, this dog is the essence of the Blow, it's getting its hair blown back, the dog is so with it. That's the story of the dog. The dog knows exactly what the Blow is about. The dog is sort of a cult figure for me.

What were some of your favorite moments recording your new cd?
There were times when I would feel really crappy inside my heart, I knew I wanted to get the record done. But I would sit in the studio, feeling sort of defeated. There's something about working on a big project by yourself that brings out these vile feelings in you. I would feel bad, so then I thought, "ok, I should go do something I like, something nice." But then I would think, "No, I have to get it done." So I'd be in the studio, feeling so gnarly. Then I'd turn on the fan (it's really hot in the studio), and start pounding on the keyboard. In a couple of cases, I did that for like two hours, and sometimes when I sat there long enough, I'd finally be fiddling around with different song parts, and something would seem very nice to me. Out of those bad, sad feelings, some really nice sounds would come out. The tenderness, the sensitivity came out. The second part of "Sweetheart" flowed out that way. "The Warriors' Hearts" did too.

When you get that gnarly feeling, what do you do? Ignore it? No. Yell at someone? No. Make a song about it… that's what happened a few times.

There's lots of great sounds on the record, keyboards, drum loops, samples, guitars. How did you choose the way the songs would sound?
The sounds on the record were dictated by the instruments—resources that were there or not there—by what I played, and by what the other people there played. If someone was in town who had a Rhodes keyboard, or sampler, we might use it. It was all dictated by what was there. Beyond that, I thought about the songs like families. Certain songs go together. "Where I Love You" is paired with "How Naked Are We Going To Get." "Nothing" and "Night Full Of Open Eyes" are both guitar based. So they were a pair. Sometimes, I would have an idea and record it, and it would sound way wrong. So I would do it differently.

I can hear trucks going by on the record.
Yeah, there really are trucks going by. There's a woodworking studio downstairs from the studio. If you listen closely you can hear table saws, vacuum cleaners. There's a brewery next door too. And seagulls live on the roof. And "How Naked" has a 'bing' from a toaster on it.

So, here at TIG we love all things imaginary. Did you have any imaginary friends growing up?
No. I wouldn't have liked that. I don't feel like I had a really vivid imagination as a kid. I felt like I was caught up in what was going on in the world, in the people around me. I wasn't really dreamy.

What's the most imaginary thing about you now?
Hmm… an abstract question. I wish I was more on my toes on this one. What I like to think about are the invisible things that happen in between people. What people carry around inside them. I like to think about the architectural structure of people, how sometimes it can seem like someone is wearing a large mascot costume over themselves. I'm more interested in the invisible than the imaginary. Once I imagine something, it's not imaginary it anymore!

Obligatory karaoke question: esteemed pastime, or the devil's work?
I think a lot about karaoke. The undisputed most gifted karaoke person is Jason Anderson. He is a channel. He channels something through karaoke. I'm not like him though. I've done two good karaoke songs. But I like to think about people practicing karaoke, practicing singing songs written by other people. Practicing to feel like what those people felt. Thinking what they thought. And then, to publicly convey those feelings in the songs. That's such a challenge.

What do you like best about being on K Records?
It's not a hard-sell label. And Calvin lot of integrity. He puts out records because he likes to. I have a studio in the big room, and I've been able to use all this equipment. Calvin's opened it up for me. The mic I've been using, he paid $3000 for it, and he never once said 'watch out, that's expensive,' or anything like that. Everyone is so, so generous, beyond what I could have counted on.

Anything else you'd like to tell us about?
We're playing a showcase at CMJ, and we just got asked to play with Fannypack!