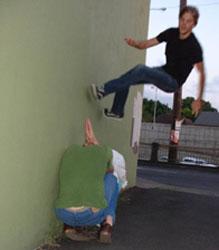 Sound the bells, kids: Menomena is the shiiiiiite so you need to pay attention here!!!! After hearing their debut release I AM THE FUN BLAME MONSTER and then seeing (and sponsoring) their first ever Seattle appearance, I've gotta let all my imaginary friends know that Menomena is a BAND TO WATCH for in 2004!! Seriously, dudes. This three-member band outta Portland rocked and they're named for my favorite Sesame Street skit of all time!!!

And whoa! They have many animal photos on their craaaaazy-ass website, including a black pug puppy named Geddy Lee and brown farm pigs! Yo, their name is an anaGRAM CD is a freeeekin' flipbook!!!

OK, it's become clear to me that igDana is off the Menomena deep-end, so the task of actually reviewing and describing Menomena is obviously left to me.

When I first heard the name Menomena, I found it so soothing to say, and yet it had no known meaning to me. I thought, "I think I will chant it softly to myself when my stress level rises. 'You want all this DONE by NOON today?!?! Do you realize it's 11:30 now?… menomena, menomena, {deep breath} menomena.'" Ahh, suddenly everything is okay.

Then I saw their website, which gave me third degree monitor radiation burns.

First of all, shhhuuuush! I heart their website. It's bright and fun and silly.

Second of all, I am going to out Char right now because she never saw the Menomena sketch on Sesame Street! You know the one, the one with the two monsters {fun blame monsters??} who chanted, "Menomena! Do dooo! Da Doo doo! Menomena! Do! do! do! doo!"

…which would then progress into this goofy little jazzy catchy melody, one that to this day is perfect for removing unwanted earworms from bad radio tunes from your head.

What can I say? I grew up in a junkyard. We didn't have Sesame Street. Seriously.

No, that's just my childhood. Menomena was astonishing.

Nothing prepared me for their live performance at the Sunset Tavern {their first time ever playing in Seattle, incidently}. They were astounding, amazing, phenomenal {menomenal??} and uber-talented. Even the stage setup left us off mildly mind-boggled: drummer stage right, keyboards stage left, and frontguy in the middle playing every other instrument in-between.

It's like these guys got together and said, "How can we compensate for the fact that we only have three members in our band?… How about if we play eleven instruments each?" They even incorporated clapping in their songs, to go alongside their guitar/tenor sax/alto sax/accordian/etc etc {there were more instruments, I'm sure, but I ran out of paper trying to write them all down}. They were the Polyphonic Spree, only condensed into three mega-concentrated talented musical geniuses. It was indie rock band camp.

You know what else astounded me? They played a ga-zillion instruments and still maintained a signature sound.

I loved the effect they opened with on the keyboard. It sounded nearly Mates of State-ish, like a music box, so pretty and fragile. When juxtaposed against the crunchy, cruel guitar it created a gorgeous dichotomy.

I never knew where the vocals were coming from or what instrument was coming next. There was even a xylophone, and the hottest indie-rock saxophone since Bennett Slothower. Challenging in monumental nudges, Menomena kept me wondering: what will I hear next? Where will it come from? Their music had great melodies, a lush darkness, mathmatical precision, but with rhythm — so you could indie-rock headbob nod to it.

The Menomena song I know from childhood (see aforementioned "do doo! da doo doo!") was patterned, foreseeable. These guys captured the same sense of silly fun, but without the predictability. They left me a akimbo and agog — two of my favorite adjectives.

Plus they make me want to type in BiG cOLorEd LeTteRs! And roller skate! And finger paint!!!

Also: note and revere!! Turns out Menomena are so smart and creative and stuff that they evented their own software to aid in song composition. *WOW!* You can like read about it by following links at the bottom of this page YES!!!.

In closing, I wish to add that lead singer/bass player/guitar player/sax player/genius Justin Harris had the thickest {width and girth} leather guitar strap I had ever seen. It was practically a whole cow.

Sadly we missed openers Gravity and Henry (also from Portland), but we did get a copy of their quite cool latest CD Sputnik: Travelling Companion. We sure hope they come back
soon so we can catch them the next time through!}