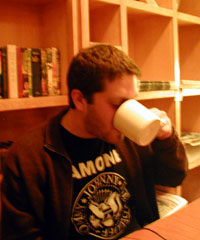 Rob Schaffer of the Femurs

Pre-occupations?
Rob plays drums with Loveless and the Goodnight Trail and has a solo venture, The Femurs, where he plays all the instruments, sings, and writes all the songs. He is also an on-air personality on 90.7-FM KSER. He has a Bluegrass show on Saturdays from 8p-10p.

Coffee Specs:
Beverage of choice:
Coffee, the black drip kind. No donut. A man of simple needs.
Coffee Shop of choice:
Beat Coffee – the Kincora coffee cart. To the casual Capitol Hill-er, Kincora is a fine neighborhood bar… but a couple key hours each day they also whip out the cart.
Because…: It is right near his apartment so it is a perfect place to stop while walking the dogs. Yes, a fine musician AND he has the cutest doggies in Capitol Hill: Joey (the pup who has a song written about him on the Femurs album), Cody & Cubby.

What are you listening to now?:
Jonathan Richman, the Ramones, and Bluegrass.

Trivial Pursuit Question: What was the Femurs’ first name?
The Funky Pastries

Random follow-up question: How does The Femurs differ from the Loveless and the Goodnight Trail?
The Femurs is a one man band… Rob. The Femurs album follows right in line with the kind of stuff that he loves to listen to – pure, essential, three chord pop and simple short songs. The Loveless and the Goodnight Trail has that, but with infusions of other deeper things. LATGT discusses the same stuff as the Femurs, but in more complex way. Each member brings in their own musical influences – from the Replacements, Husker Dü, Dinosaur Jr., Jawbreaker, the Ramones. Where the Femurs write lost love songs, LATGT write more metaphorically.

Interesting Stream of Consciousness Story: How did Rob and Bluegrass become close friends?
Rob left New York in 1998 and made it as far as Olympia before his car broke down. Car-less and new to the area, a wacky series of events led him to work in which he was paid with stuff from his friend’s deceased father’s garage stash. The place was full of the most random of objects. One of his acquisitions was an oil barrel full of Bluegrass records. When Rob moved up to Seattle, he filled his time by getting to know and falling in love with his newly acquired Bluegrass collection. Rob described Bluegrass best, “It’s like the Ramones, only with a banjo.”

Eloquent Words of Wisdom:
When discussing whether our opinions on how to balance mean musicians who make incredible music, Rob reminded us to “separate the artist from the art.” For example, Marky Ramone wears a wig and looks terrible… it is shameful… but you still have to respect the guy.
Rob, when can we see you again?

Or by the album…