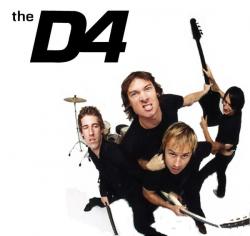 Even before they played their first note, I knew the D4 were going to leave me metaphorically pantless. The place already had a ting of back-of-the-van B.O. and the audience members were all standing feet-shoulder width apart. I followed suit and, feeling inspired by the energy of the rock 'n roll scent hanging in the air, I made my way to the front of the dance floor.

Prior to the show I had already become friendly with their album, 6Twenty so the intensity of their music didn't come as a surprise. Well, it did — because how many bands can pull that kind of thing off? This kind of concentrated mass of energy either leaves you knocked to the floor or stuck to the ceiling. Iggy and the Stooges, yes. Exactly. For those of us who missed Iggy when he was still playing with the Stooges, I give you D4.

With their veins popping out, their eyes rolling in the back of their heads, and male groupies fondling their guitars, they hit all of my favorites from the recently released 6Twenty album: "Rocknroll Motherfucker," "Running On Empty," "Get Loose" and "Rebekah." Near the end of the set they through out a couple covers — with one I recognized as being a Guitar Wolf song. Throughout they pulled out all the moves, the ones that up until this night I thought I would only ever see in a Van Halen concert video. You know the ones — like where the guitarist leans over the monitor on his back dipping his head into the crowd or he jumps into the crowd carrying on with his guitar solo. Pure sweaty rockstar genius.

And the BEST part… the BEST part was when they were in-between songs… you know, picking up the mics that were knocked onto the floor in the last song and the drummer got that over-excited-Ritalin-kid look on his face and mouthed the words, "c'mon let's rock!" twice over as he shook his drumsticks into the air.

And, if you don't believe the above, you should use the fact that up until now I haven't even had the breath to tell you that they are from Auckland, New Zealand. Here they are from the easily infatuatable {I swear that's a word} isle of New Zealand and that point pales in comparison to their live performance. Kiwi or not, they were well worth braving the 99% humidity that filled the Graceland that night.

I felt overjoyed that I was present for this chapter in the re-re-rebirth of the rock anthem. My demons were exorcised, and the crowd, transformed {and sweaty}. I felt dirty but vindicated. Excellent.