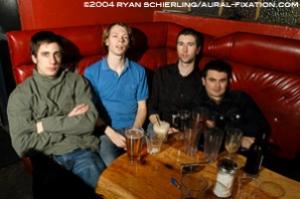 Critically acclaimed Clearlake is one of the best British bands out there today. These charming boys from Brighton, England were kicking off their first U.S. tour at the Crocodile. Despite being bit jetlagged (and maybe slightly hung over after their first proper night out in America at the Cha-Cha), Jason Pegg, Sam Hewitt, Woody Woodward and Toby May chatted about lots of things with igLiz and lee. over beers and several white russians.

Jason is the main songwriter, vocalist and guitar player. Sam harmonizes beautifully with Jason, while deftly playing guitar and occasionally percussion. Playing bass and offering a bit of vocal support here and there is Woody. And Toby, who we learned replaced the original drummer more than a year and a half ago, quite ably holds down the percussion.

And without further ado…

TIG: Do you have any good touring stories from Europe? This the first time you’re touring the U.S., right?

TIG: That’s right! I heard you on KEXP, which was so awesome and made me run straight to the record store to buy your record. And all they had was the "Almost the Same" EP – which of course I fell in love with.

TIG: Yeah or even just driving around your home town…

Woody: What about the time we discovered this wonderful drink called "Flaming Fat Man"?

Toby: Yeah, that happened on tour.

Woody: We were in York, in a pub, having dinner. And, a very large barman asked us if we’d like to try a new technique of drinking. So you get a shot of tequila in a glass, and you balance a segment of an orange on the rim of the glass with brown sugar on it. And then you get a large spoon w. tequila in it and you heat it over a candle until it bursts into flames and then you pour over the brown sugar and it caramelizes. And then you drink it.

Sam: And you get a pillar of fire in the drink for a moment, and so the lights have to be off. It’s a big ceremony.

Jason: I seem to remember a 6’5" man in New York shouting, "Get out of my way New York. You’re slowing me down." He was dressed like a tennis player and shouting.

Toby: We met a great guy today (in Seattle) as well, on the pavement. There was this really camp looking guy with a bandana (and) this sleeveless thing who was dancer. He was pirouetting down the sidewalk.

Woody: Yeah, instead of saying, "Excuse me, you’re in my way," he went and bumped into me a little more.

TIG: Because you’re so critically acclaimed, one of things I wanted to know was, lots of really honorable people are among your admirers. Is there anyone you find most surprising or one that makes you blush?

Sam: Michael Stipe made me blush.

Jason: You might not know him, but there’s a guy named Matt Lucas. He’s a comedian. He didn’t make me blush, but I liked it when he said he liked our music. That was a nice weird thing when he turned up at a gig.

Toby: Yeah, Grandaddy. (But) I think all of the big ones happened before I came along. I’m still on a bit of a trip about it really. Just getting used to going away.

TIG: So do you have any unusual favorite musicians or songs? I ask this question because I get a different answer everytime and they always surprise me. Last time I ended up discussing that guy Peter Cetera from Chicago.

TIG: Exactly! I had asked "what was the first song you ever fell in love with" and got that. It was awesome to talk about that song "Being without you!" So, do you have any odd influences? Like when you pull it out of your closet people are like, "You like Justin Timberlake?"

Woody: I would have to say the new Britney Spears.

Toby: Oh you bastard!! I was gonna say that!

Woody: You know what I really like is when she sings falsetto. She gets that girlie, falsetto-y thing going on. I think it’s quite experimental for her.

TIG: Yeah actually there’s an album in that genre that I totally love. And people think I’m joking when I tell them how much I love it, but it’s almost like a sorbet. It cleans the palate to get back to indie rock. So, you could think of it that way.

TIG: (blushing and knowing this question was inevitable) Ummm, I don’t know if you guys know the name Joey McIntyre? He was a New Kid on the Block? Yeah, he was the young one. He just did this album like two years ago, and it’s soooo… well, there’s this song called "NYC Girls" that I could just rap along to right now… for the right amount of money.

TIG: (laughs) I put it on mix cds and people are like, "That was a really funny song!" And I’m exclaim, "You gotta hear the whole album!!" So I imagine that Britney Spears took a nod from Joey McIntyre and his NYC girls masterpiece.

Jason: I have a guilty pleasure that’s really something actually. And actually no one may know this, but one of my favorite bands… no, no, I listened to it recently… I’m really in to is this 80’s record by Scritti Politti.

But the most guilty pleasure was that he did a song… well, I’ve realized I really like people who do themselves, or they have an obsession and they go down this line. I hate the sounds that he picks or the way he picks it. It’s incredible.

Anyway, he did a cover of Beatles song, which is blasphemy anyway. And, he kind of did it. And I really love the way he did it. And it’s horrific! It’s horrible! And it’s got Shabba Ranks, who is like this rascist horror. And he did a cover of "She’s a Woman." And I love his horribly high-pitched, sort of transsexual voice
. I don’t know what it is, but I love that he spent so much time making meticulously weird popmusic. And I would never try to make anything like it, but I like something in it. It’s got a weird soul to it.

TIG: What do you all think of The Darkness?

Sam: I liked them for that long (hold up hand, displays less than 1/2 inch between his thumb and index finger). (but) I loved the idea.

TIG: What are you guys listening to in the tour van? Did you bring some music along or are you just going to enjoy the radio?

Jason: Today it was Cat Power.

Toby: And tomorrow we are going to be listening to my CD. It’s a Finnish band. You might know of it? They’re called Apocalyptica. And it’s four cellists doing covers of Metalllica songs. It rocks. (Everyone is laughing)

Jason: What do they sing?