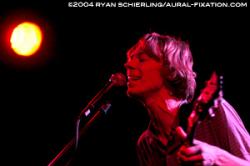 Clearlake were my Bluetones of 2003.

Just as with the initial notes of Bluetones' "Talking to Clarry" (the first song on the first Bluetones' album, Expecting to Fly), the first time I heard the opening chords of Cedarlake's album Cedars, my heart was immediately a flutter.

It is already on the cusp of desert island disc status for a variety of reasons… but primarily it is because Cedars is an upliftingly dark album that reminded me what my inner most thoughts had been trying to get through my skull for months and put me back on track:

I'll admit it, even though I had been listening to their album for months, by the time they made it to town, I was only four steps into my embodiment of this life-renewing mission statement. The in-person, live-show intensive was just what my campaign for self betterment needed.

It was their first stop on this US tour and, right out of the gate, they sounded as meticulously fit live as they do digitally. Not an easy feat for four jet-lagged fellows playing not-even-recorded-but-fully-perfected-and-beautiful songs, on borrowed instruments, for the first time, to a less than teeming audience.

The new material blended well with their catalog favorites. Their ability to make the bleak feel lush and inviting was unaffected. I credit their formula of Galaxie 500-esque echoing melodies against a vacuum of guitar plucks converging into Mogwai-perfected crescendos.

Lead-singer Jason Pegg's voice evokes the severity of a well orchestrated Machiavellian musical. His storylines are recounted with a Morrissey-esque vocal tonality that is crisp, clean, and concise.

Clearlake's songwriting style creates a gorgeous intensity in both the before and after. Through commiseration comes rejuvenation, and comfort amid darkness. One particular nugget of insight came in the form of a new song "You Can't Have Me." The refrain "You can't have me, you can't keep me from myself. Not you and no one else" is a sentiment we should all heed.

By the end of the evening, my mantra was given a whole new luster. I added a crucial point to my search for zen-ity: