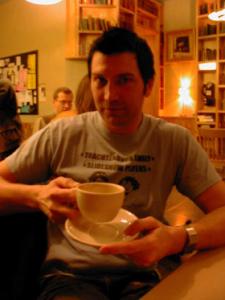 What’s in a name?
The name Dorkweed, I don’t know if it was a good idea or not. Originally it was just me recording, and I didn’t want to give the first recording my name. Dorkweed just sounded like a childhood deragotary comment. Sometimes I think it’s a hindrance, sometimes it’s great. It’s memorable, if nothing else.

Pre-occupations?
I’m totally obsesed with music. But ’til the music pays for everything, I work for an insurance agency, which is very rock and roll.

Coffee Specs:
Beverage of choice:
Double-short non-fat latte without flavors. Flavors make it too sweet. I’ll probably move to drip soon.
Coffee Shop of choice:
I live in West Seattle, where my favorite coffee shop is Diva Espresso. When I’m in town, I go to Top Pot or Vivace.

How did you find out about the Three Imaginary Girls web site?
This is kinda embarrassing…. but once every six months or so I run a check for “Dorkweed” online. I checked it a few months ago, and it linked to your Indie T-Shirt article.

Don’t be embarrassed. I think we all do that from time to time…
Then a few weeks later, my friend Steve the Producer judged the Cutest Band contest, and well, you guys were there judging it too…

That’s right — Liz was a judge. But enough about us. Tell us what Dorkweed’s been doing lately…
We just released a DVD. It was produced by Bob Smolenski‘s DVD company. He’s this genius guy who also plays cello for Saeta. On May 30th we’re going to have a DVD release party at the Rendevous with Chrisopher Blue and Roxy and Clark. They have surround sound there, so after each band plays, we’re gonna show a DVD — to showcase all the bands, and also Bob’s company.

Sounds cool! Any plans for a new Dorkweed CD?
Yeah, we have most of the material for the next record. We’ve had a record every year since 1998, when the first one was just me.

What local artists are you liking these days?
I think Lesli Wood is the King of all Women. I don’t know how any one person could do everything she does. In addition to all her bands (Saeta, Ms. Led, Lesliwood, Roxy and Clark), Lesli pop up in all these great women’s movements. Other than that, I’m loving the new Thermals release. It’s a really great record — it’s so low-fi but it doesn’t matter. Another great local artist is Daniel G. Harmann. He just finished a full-length, and it’s amazing. It’s of Pedro the Lion importance.

Who are your musical influences?
Pixies — everyone loves the Pixies! Iggy Pop. As for newer stuff, the Strokes. You know how you don’t like to like a band when they’re too popular? Every time a Strokes song comes on, I’m happy.

What’s this rumor I heard about Dorkweed playing a show with two drummers?
The two drummers show was so fucking cool! I would have thought it was a bad idea. Steve (from Peter Parker) and Curtis (Dorkweed) are my two favorite drummers, and we were drinking one night when the idea came that they should both play together. We thought it was just drunk talk… but the next thing we knew, Matthew Parker chimed in that he wanted to play keyboards!

We all played together at the Sit ‘N Spin in February, and it was great! You couldn’t even tell it was two drummers — it was just… bigger!! But now we have a dilemma — people wanna know if we’re going to do it all the time. And you know, we probably will do it another couple times.

When Peter Parker releases their new DVD, there’ll be two songs from the Dorkweed show.

What does the near future hold?
Be on the lookout for the Western Growers Association — an acoustic side project — coming soon. And Dorkweed will be touring this summer…