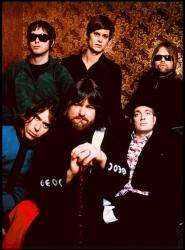 The Soundtrack of Our Lives, with Caesars

It's true. The first time I ever heard Sweden's Caesars was on the WB's "Dawson's Creek." Katie Holmes was making out to some guy to the sounds of… vocals distorted through crappy microphones? A farfisa? Hold on, a vintage keyboard song appearing on "Dawson's Creek?" So, reluctantly I slogged my way through the entire episode (um… ok, actually I watch the show every week but that is quite another story). Anyway, over the credits at the end, the 'featuring music by' blurb displayed a cd cover for a group called "Caesars" and replayed the snippet of that catchy garage song.

I'd never heard them before but I dug their Billy Childish-style name and their Nuggets box-sound. Then when I learned that they'd be sharing a bill with fellow Swedes The Soundtrack Of Our Lives, I got my Graceland ticket faster than you can say "rockhjältarna!"

Another late night at work (a very unfortunate and constant factor in almost every show I go to) brought me to Graceland's smoky confines just as one band was tearing down and another was setting up. Had I missed Caesars? No, it turned out I had missed the opening band entirely, and the drumkit that was being putting together on stage had "Caesars" written on it with torn pieces of masking tape, so I was in luck.

Caesars took the stage dressed in garage-rock staples: the leather jackets, the striped shirts, the Chuck T's. They jumped right into "Sort It Out," a love song that opens with a schlocky new wave guitar riff and the line "I wanna smoke crack / cuz yer never comin back / I wanna shoot speedballs / Bang my head against the wall." Watching the band careen and crash through their set with sloppy abandon, it was clear that the members of Caesars weren't really the broken-hearted type, but they would use any excuse to shoot speedballs.

Catchy but not disposable, I was still singing Caesars songs days after the show. Highlights like "Out Of My Hands" and the farfisa-driven "Jerk It Out" may tread familiar ground (minor key, 4-chord stomps, shouted choruses, and fuzzy guitars), but Caesars deliver with an almost reckless flair for anachronism that kept me guessing at what would happen next.

Back in the 90's, the garage scene was crippled by a reductive adherence to 'the rules' (think of the countless bands on labels Estrus, Crypt, or In The Red who took "No Fun" by the Stooges a little too seriously). Today's current garage exponents like Caesars aren't afraid to mix up the formula, and therein may lie the key to their success. So, despite their love of garage rock and its obvious touchstone influences (Ramones, Standells, Milkshakes), Caesars played a song that quoted Frank Zappa lyrics. Despite the matching leather jackets up front, the Caesars' drummer had Interpol hair and wore an 80's suit. Somehow, the keyboards sounded as much like Tommy Tutone as the Troggs. And, well, someone in the band agreed to the whole "Dawson's Creek" thing.

After their set, the crowd got all hushed and reverent — the change in the air was palpable. The Soundtrack Of Our Lives were coming! I was already a fan of their third album, 2002's Behind The Music after one friend after another played me tracks from the record, each one claiming, "This is the best band I've heard all year."

Like their countrymen and bill-sharers, The Soundtrack Of Our Lives also look to the past, but instead of raiding the noisy motorized tools in the garage like Caesars, TSOOL head straight for the dusty 8-tracks, crafting their sound from the boogie-rock bigness of Mick Taylor-era Rolling Stones, the prog/art doubleshot of Pink Floyd, and the emphasis on strong songwriting from "Blue Album" Beatles — in other words, focusing on that portentous moment when the capital 'R' was first used to describe what used to just be called "rock." But because TSOOL share the Casears' skewed genre-refraction, they aren't just classic rock copy-cats — they effectively mix and match their influences to transcend that risk of devolving into yet another backwards-looking bar-band.

First of all, would the lead vocalist for any bar-band stride quietly onstage dressed in a muu-muu and making weird Egyptian-style gestures with his hands? Hell no. But Ebbot Lundberg did, and he captured everyone's attention immediately — this was what the hushed reverence earlier was all about. Lundberg had a singular stage presence: burly, bearded but completely benign, he looked like what Brian Wilson could have looked like in the 70's if he'd done the filling out without the freaking out.

Launching instrument by instrument into a steady groove behind Lundberg's undeniable presence up front, the five remaining members of TSOOL constructed a sweeping, majestic sound for each song. The long intros set up the epic verses (with quasi-mystical lyrics) which melted into anthemic choruses that you felt like you'd already known your whole life.

The songs were organic and took their time to develop. Behind the Music album tracks like "Mind the Gap" and "Sister Surround" received stately treatment, and the years of touring in Sweden showed: the band was super-tight, even at their loosest moments. As they played, I started picking up some 70's intensity and 90's irony — which confirmed my opinion that while they may play the Rock, The Soundtrack Of Our Lives figured out that the Rock didn't stop in 1969.

About halfway through the set I noticed that every song the band played had the build/sweep/release of an encore… they could have ended the set with any song they played and we would have all gone away satisfied. This gave their entire set a very comforting, gratifying feel. Yum.

Very possibly the gentlest rock star I've ever seen, Lundberg sang with a forceful delicateness, and even when the lyrics bordered on Oasis-like slurred cliché ("I've been cheated by TV screens / and artificial families too"), his intense sincerity sold me every time. And talk about commanding an audience: towards the end of the show Lundberg asked everyone to sit down. Everyone did. Then he walked slowly through the crowd, singing to the seated audience and waving his arms in his weird synchronized-swimming hippie gestures. What could have been forced, uncomfortable, and strange felt instead like a perfectly natural part of the show.

Then, after an entire set of anthemic, larger-than-life potential set-closers, one of those songs really WAS the set-closer. The Soundtrack Of Our Lives left the stage and, in a jarring re-entry back to reality, I realized I clearly I wasn't ready for the show to end. I'm still not sure what "rockhjältarna" means, but in the case of The Soundtrack Of Our Lives, it would definitely be spelled "Rockhjältarna."