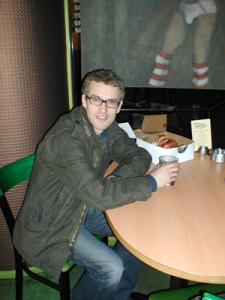 Colin, no Coffee?
Beverage of choice:
I prefer tea over coffee… the chamomile I have now I grabbed from the KEXP kitchen when I was there earlier today {stated with an apologetic smile and an, “I can’t place where I put the tea bags I brought with me” explanation}.

Coffee Shop of choice:
I don’t have one of choice because I am not a coffee drinker, but I can sympathize with the corporate takeover of the coffee industry. There is a Starbucks in Glasgow that took over what was a bohemian cool record store. I don’t want to politicize my hot drinks — but taking over a record store isn’t nice.

Who are your musical influences?
I’d say my uncle’s cover band. They were called The Wave Band. When I was six and seven, I watched them practice in the garage and play around the village. They played stuff by the Beatles, the Stones. When my brother got married last year, I had them reform… it was rather self-indulgent really — I could say I was in the Wave Band.

What are you listening to while on the road?
I don’t listen to music that much because it’s always in my head, taking up space… kind of like the plumber who doesn’t like to fix his own pipes. I usually listen to lots of classical music and I like Radiohead and the Flaming Lips… but right now I am also listening to “The Man Comes Around” – it’s stripped down Johnny Cash — and I just bought the new White Stripes album. I kept hearing about it and I decided I need to actually listen to it myself… although I haven’t had the chance to open it yet.

How did you transition from Wave Band fan to musician?
My first band started up when I was ten, a band called traX {yes, emphasis on the X}. It was a cover band… I did that until I was about twelve. Then when I was 17, I had a band called the Lovesick Zombies. We thought we were the Clash… we were shaved and smoked cigars. That’s when I started writing songs. Then I went to Glasgow and started evolving, and finally in the last few years I’ve started sounding like me instead of sounding like me trying to sound like someone else.

Random follow-up question: How is the tour going?
It has been great. When I first write songs they’re raw and stripped down, and that’s how I’m playing this tour — informal, intimate, acoustic thing. And when I was in Philadelphia, I was able to meet up with the Delgados and played darts at the Black Sheep Bar. They’re from Scotland too.

Interesting Stream of Consciousness Story: Is that your dog on the cover of your first album, “Loss”?
I used to say it was my Gram’s dog… but that’s rubbish. Her dog looked like that though. It was called Trudy… and when I was a kid, that was my nickname from my mates… oh, I shouldn’t be telling you that… {cute hand on forehead motion}. Only in Mull could you get a nickname from your Gram’s deceased dog.

I found the image three years ago in the Hulton Getty Picture Collection in the 1920’s edition image bank. It is full of black and white photos… crazy pictures. That one was shot in 1964 in Amsterdam. I was drawn to the pain in the dog’s face… like it is thinking, “What the fuck’s going on?”

{Trudy — oops, we mean, Colin — knows exactly what’s going on when he plays. If you missed the show, the least you could do is go check out the official TIG review from his Seattle appearance at the Green Room, which took place hours after our meeting. Dreamy.}