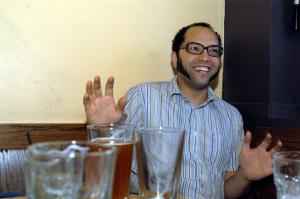 Hey Nabil. Tell us what you do.
I drum for the band Alien Crime Syndicate. I’m also the co-owner of Sonic Boom Records, and I have my own record label, The Control Group.

Coffee Specs?:
Beverage of choice:
I like single short Americanos, half-full. It’s not an Americano, it’s not espresso — it’s potent and simple. Espresso To Go in Fremont is my favorite.
Of course, we’re meeting here at the Canterbury (bar) instead of a coffee shop. So, what’s your poison?
I’m a vodka and an amber beer drinker. {note: tonight’s beverages of choice: Mac and Jacks and Fat Tire}.

How does it feel to be called ‘the nicest guy in rock,’ and how did that title come about?
(laughs) It came along because of Kurt B. Reighley (frontman for Purdy Mouth, Seattle’s only gay-alt-country band). We asked him to write a bio on Alien Crime Syndicate, and it was included that comment the first draft. And it’s not like one of those things you’d change… there’s nothing dangerous about being ‘the nicest guy in rock.’

What local artists are you liking these days?
I really like The Fitness and Post-Stardom Depression. Of course, they’re both on my label, so maybe I shouldn’t say that.

Hah! Well, who are your musical influences?
I liked a lot of metal in junior-high and high school. Kiss is my favorite band of all time; they’re the reason I like music. Of course, I realize now that they’re greedy fan-cheating shysters. They’re a mediocre band, at best. They’re horrible. But I still get chills when I listen to their first album. I think everything’s more impressive when you’re younger, because you have less to compare it to. My mom took me to see them in Madison Square Garden when I was seven.

Sound like you have pretty cool parental influences, with mom taking you to shows as a wee one and your dad as a famous jazz musician…
My mom’s awesome — she lives in San Francisco, and she and my stepdad go to our shows when we play down there. As for my dad (Roy Ayers), I was a 70’s love child, so I don’t really know him that well, I never knew him. It’s weird, lately there’s been this resurgence of people sampling him… and that’s kinda weird. I sure look like him.

My uncle is a musician, so that influenced me. He bought me my first drum set when I was two, and I also play guitar and bass. I’ve always been around music, since an early age…

What are some of the cooler bands that ACS has played with?
We played with Weezer once, at the Casbah in San Diego — it’s this really small place, and kids were lined-up on the street to get in. During the sound-check, there were only four of us there, and we got to hear them play seven songs, including all this stuff from Pinkerton, which I still think is the best. It was our own little private Weezer show!

We also toured with Sugar Ray. Those were the best shows, with the best audiences, and we sold the most merch — we played half the shows in college towns, and half in amusement parks in the midwest. It was the most fun ever. They’re the nicest guys — super hard-working, and they really took care of us. It was quite admirable.

We played a few shows with Andrew WK. I love that guy, and so does Mike, our guitar player. He’s super smart, but super A.D.D. or something. The guy could sign autographs for 3-4 hours, and would write each fan a letter that covered the poster.

How do you feel about karaoke?
I like it, but I’m scared of it. I’m a drummer. I like to sit in the back. I’ve done karaoke twice — the last time I was so incredibly drunk I did the Stevie Nicks part of “Stop Draggin’ My Heart Around” with the sound guy we were touring with. That was two years ago. You won’t catch me doing it… but I’m all for it.

One last question: how you found out about the Three Imaginary Girls website?
I was on the phone with Eric from Criminal Records in Atlanta, and he mentioned if I had heard of the site while I was talking to him — and I hadn’t. I went and looked while we were talking and was like, “Holy shit! What is this?!!”

{We had that same reaction when we met Nabil, who really is as nice as they say! Thanks to Eric for the long-distance introduction of sorts, and be sure to check out ACS as they tour the west coast with TIG favorites Visqueen… or just stop by one of the three Seattle Sonic Boom record stores and say hi!}
Get some Nabil…