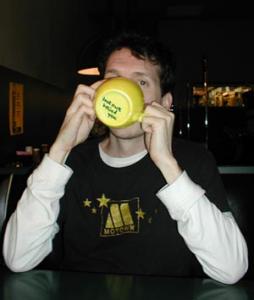 Chris Lorraine of the Malinks

How the hell are ya, Chris Lorraine from the Malinks?
Great! Thanks for the coffee!

What’s your coffee poison, and where do you like to get it?
Double short americano, with room, but I don’t actually add anything. I love coffee. In fact, I loved it a little too much, so I had to choose between coffee and sleep! So I just don’t drink it very much anymore. But if you’re buying, hey…

I like the Victrola, the Diva on Greenwood, and you know Shari’s on Aurora makes great drip coffee..

What are you listening to right now? What are your musical influences?
On the walk over I was listening to the Like, a great band from LA. They have two ep’s out that are both so good. I also like the new record by the Sisterhood of Convoluted Thinkers. Some of my favorite records were made by Unrest, Jellyfish, the Smiths, Joni Mitchell, Stevie Wonder, Blur. The Hardy Mums, a band from New Jersey, put out a cassette in 1992 called “Keith to the Kingdom / Us Chickens.” It is my favorite album of all time.

The Malinks have quite the reputation for live cover songs. What are some of your favs, and why?
We started out doing more lo-fi stuff like “Brand-New-Life” by the Young Marble Giants and “Ex Lion Tamer” by Wire. Somehow that evolved into “Poison” by Bell Biv DeVoe, “A View To A Kill” by Duran Duran, “Waterfalls” by TLC, and “Hopelessly Devoted To You” by Olivia Newton-John. We once played an 80’s party where we played 50 songs from the 80’s. This was at a bowling alley in Detroit, Michigan. {Bass player} Shane dressed as Tom Cruise from Risky Business, and everything was going great until the lane manager stopped the show and told us Shane couldn’t play in his underwear.

Speaking of cover songs, we know you’re a karaoke enthusiast. What are some of your favorite karaoke tunes?
I like songs where I either nail it, or it’s a total flop. I am not afraid to flop. My faves are anything in the Paul McCartney & Wings catalog. “Band on the Run,” “Jet,” “Live and Let Die.” Also “Whenever I Call You Friend” by Kenny Loggins and Stevie Nicks. Um, “I Can’t Fight This Feeling” by REO Speedwagon. “Photograph” by Def Leppard.

Sometimes karaoke gets boring because people pick the same songs over and over. I think karaoke machines should have a built-in mechanism that automatically retires songs that have been sung way too many times. “Coming up we have Bubba singing “Walking After Midnight” by Patsy Cline. Oh, wait, that song has reached its limit. Instead, you’ll be singing “Midnite Maniac” by Krokus. GO!”

TIG will know we’ve “made it” when we finally get to play Scrabble with Stephin Merritt, or when we get a shoutout from Jane Magazine and NME during the same month. What quirky victory would let Chris Lorraine say, “All right now. The Malinks are the shite?”
It’s a three-way tie:

We heard the Malinks just went on a midwest tour, where you experienced some freak-of-nature sorts of setbacks. Can you fill us in on the details?
A tornado tore through Minnesota and we had to spend the night on the airport floor. At about 3am they decided to send everyone to hotels, but it was raining so hard that the hotel shuttle buses refused to come get us. Luckily the airline gave us these little travel kits. I was so fascinated with the little soaps and tiny shaving cream can that I stopped being upset and I don’t even remember where we slept at this point.

Anything else we need to know about?
The Malinks would like to invite all of you to our CD release show on Wednesday, October 29 with the Dear John Letters, Verona, and Argo at the Crocodile Café.

Oh yeah — Three Imaginary Girls is sponsoring that show!! What do ya know… Should be a rockin’ great time, so you should all come out.