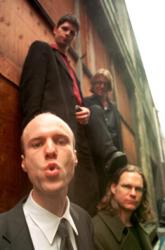 And on the fifth day, Seattle's own Sushirobo played their CD release party at Graceland with Kaito and the Walkmen, to support their brand-spankin' new CD, The Light-Fingered Feeling of Sushirobo (Pattern 25 Records). igDana heard what they played, and she knew it was good.

I think Donny and Marie Osmond said it best when he said: "They're a little bit funky… and a little bit rock and roll." Here's a band that named themselves after a Vancouver restaurant where robots make sushi, playing music that intentionally de-emphasizes traditional guitar, instead opting for spacious tones with plenty of room for the irreverent. With saucy, well-articulated lyrics, Arthur Roberts made me giggle by rhyming a sentence ending in the word "Belladonna" with, "You light a candle and pretend it's marijuana." Tee hee.

And I don't even think that lyric was from a real song — I believe it was his consummate-front-man-filler-schmutz while guitar player Dave Einmo troubleshot his instrument's technical issues. Now while it might cause a "normal" rock band anxiety to have guitar functionality meltdown during a CD-release show, that effect must have been exponentially greater for Sushirobo, as they had wacko guitar effects a-go-go.

Not that their anxiety showed. Their effortless charm was infectious, and after one improv song, Sushirobo were back up playing, deconstructing the very notion of guitar — as in, eliciting wildly-wacky sounds from it that didn't even sound like guitar-like — part swirling weirdness, part scary little Asian-sounding guitar blips and pings and wizzbangs, all the while carrying their songs along with a strong methodical rhythm section and quirky vocals.

While at times I found the overall sound was a bit thin — hey, I like driving indie guitar rock! — I totally dug that Sushirobo elevated indie-rock sound effects to a new level of ingenuity. I've decided to dub them Seattle's capricious-pop masters.