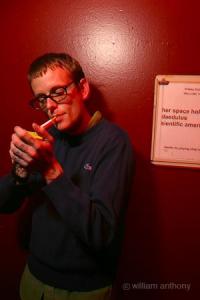 Marc Bianchi of Her Space Holiday

If you've been paying attention to this site the past year, you know that Her Space Holiday's The Young Machines has been in heavy rotation in my car… and home… and work. Hearing the album sprouts an automatic curiosity in the lone man behind the music, Marc Bianchi. I had the fortunate opportunity to talk to Marc about touring in Europe, his guilty pleasures, future projects and snow globes. Yes, snow globes.

Now that you are back from touring in support of 2003's Young Machines, are you working on new HSH holiday album or are there other projects in the mix?
I just finished up the new record last week. It's called The Past Presents the Future. It is going to come out in the fall of 2005.

Is that how you are spending your Saturday nights then?
Right now, since I am back in California, I usually spend them alone recording, or writing… I am working on a children's book. So I am just trying to stay busy. Occasionally I will go see some friends.

A children's book? Are you writing it, illustrating it, or both?
I am writing the stories and my friend is doing the illustrations. I guess it is more using children as the characters who are going through everyday adult adventures… if that makes sense?

When you're in the beginning stages of writing a song do you usually sit down at the laptop, keyboard, guitar or with a pad of paper first?
The process varies from record to record. Like with The Young Machines the focus was mainly on the music, so there was a lot of composition work done in the beginning. With this new record, I wanted the vocal melodies and words to be the focus. So I first started with pen and paper and then put the melodies to either a guitar or piano and then just started layering everything in the computer.

Every time you listen to The Young Machines, does it sound better to you or do you only hear things you would have done differently?
The Young Machines is a tough record for me to listen to because it reflects a time in my life when I was completely delusional about my responsibility for things that happen in my life. I just hear all the ugliness in some of the things I talk about on the record.

So is it correct to assume that the majority of your songs are autobiographical? Have you ever had someone in your life falsely accuse you of writing one of your songs about them?
Well, there have been a few instances where complete strangers have come up to me and asked if I knew any of their friends because the songs seemed to be directly written about them and their lives. But I guess in the end it just shows how universally messed up we all can be.

Speaking of taking your songs to the masses, you've performed minimally {relying on your own devices} and in a band setting. Which do you think makes you feel safer? Which invigorates you more?
For The Young Machines I assembled a three-piece band. It made a world of difference, not only for crowd response but for just personal enjoyment as well. It feels a lot more natural to be on stage with your friends. So if something goes horribly wrong you can all just have a laugh about it.

When you and your bandmates toured of Europe, which city did you get the best audience response from?
I would say hands down Spain was our favorite place to play. The country is just amazing and the people are gracious. I can't wait to get back there.

Now for the not-so-related to your music revealing questions — do you remember the first time you heard yourself on the radio?
I actually just heard myself on the radio for the first time three weeks ago when I was in Austin, Texas for a visit. When my friend picked me up from the airport, "My Girlfriends Boyfriend" started playing on the college station there. I had to turn the radio off. It made me uncomfortable.

What was your first tattoo?
My first tattoo was on my right bicep. It is a pair of cowboy boots with the name "duster" written underneath it. It was an homage to an old friend of mine.

What album is in your collection that shocks everyone when they see it?
I have a really large new age record collection by this label called "Windham Hill." My friend's mom gave them to me. I think people always laugh when they get to that section of my records. They have titles like "Winter Solstice" and "Piano Twilight".

What's your biggest guilty pleasure?
Cold medicine. It helps me sleep. But I haven't had a cold in a while.

Have you ever had your fortune told/palm read? If so, what did they say?
I haven't had my palm read and I don't think I will. I'd rather discover what is going to happen seconds before it goes down.

Do you feel like everything happens for a reason, or do you think that it is all chaotic and things happen by chance?
Right now my life is like a snow globe that has been taped to a power sander, so I am trying to keep faith that everything is happening for a reason, even if that is a pipe dream.

What was the last thing you heard that gave you chills?
A friend of mine just got into a car accident and broke his neck. That was a very hard thing to hear about. He is an amazing man and the thought of any harm coming to him is heartbreaking.

And finally, do you regret things you've done in the past or things you haven't done?
I am starting to see that all things in life are valuable. All the decisions you make even if they destroy the thing you love most had to happen. It's like we are so filled up with poison the only way to eliminate it from your system is to extract it and most of the time there are heavy consequences to that. I wish I had the insight to avoid certain decisions I have made that hurt the people around me… but they still needed to happen.