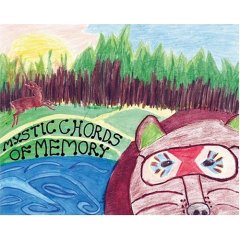 I've tried to escape it. I've hidden my poetry books. I've tried not to talk to people who look intelligent and sensitive. I've sublimated my emotions under oceans of beer. I've turned my amp up to 11. But nothing has worked. The twee will not be denied.

I like to rock. I live to rock. I wanna rock. (Insert obvious and annoying Twisted Sister joke here.) It's getting harder to do it, though. At least bands like Mystic Chords of Memory make it easier to live with accept that fact.

It's Psychedelic. It's Twee. It's Twee-chedelic. There, I just invented a new genre for the Mystic Chords of Memory. All the requisite gentle waves of sound are here: the lovely vocal harmonies, the esoteric additional instrumentation (melodica, autoharp, harp, etc).

All the twee bases are covered, but the Chords (I call them "the Chords" because typing the Mystic Chords of Memory over and over gets really annoying…) place their own stamp on the genre by sprinkling in some classic psychedelia — going on strange instrumental flights of fancy (nice violin solo on "Golden Dome"), writing songs about lobsters ("Like a Lobster"), and mixing "broken psychedelic" vocals (think Flaming Lips/Mercury Rev) with beautiful boy/girl harmonies (I'm always a sucker for those).

They sound like a Rough Trade band (well, they are a Rough Trade band), but they also sound like they'd be very comfortable hanging with the Elephant 6 guys. Not that those worlds are a million miles removed from one another to begin with… but you get the picture. Highlights: the ascending vocal line ("…we are tuning forks…") in "Open End", the waltz-time weird sounds of "Mongo and Arky," the almost-funky drum "Soul Through the Bullet Hole."

I feel like I should say more (and lordy knows I love to hear the sound of my own, er, typing…), but I'm just going to sit here and enjoy listening to this one. You should, too.