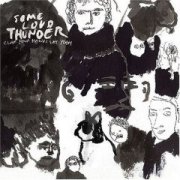 Often times, bands find it necessary to have a record label to support their musical endeavors in order to promote the record on radio, in the press, and generally get it out there for people to purchase in the great wide world. Well, Clap Your Hands Say Yeah said "bollocks!" to all that on their ridiculously successful and self-released self-titled debut, selling over 100,000 copies without any record label help.

You'd think they would cash in this success and sign a deal with some label, but again, Clap Your Hands Say Yeah scoff at such notions. Instead, they've gone and self-released their follow-up record, Some Loud Thunder. They may single-handedly prove that if a band is really determined (and, well, probably lucky and talented), they can be successful without the nuisance of recording contracts.

But something happened on the way to the record store for Clap Your Hands Say Yeah. After recording possibly the catchiest song in the last few years in "Upon this Tidal Wave of Young Blood," they seem to have decided to reject the idea that they should write irresistible indie-pop gems. Instead, on Some Loud Thunder, I begin to wonder if someone secretly changed my usual Clap Your Hands Say Yeah with a band that desperately wants to be the Velvet Underground (and damnit, I noticed!). It's one thing to branch out on your sophomore record, but it's another to almost completely abandon the sound that made your debut so remarkable — but that's what Clap Your Hands Say Yeah have done.

Some Loud Thunder opens with "Five Easy Pieces," what sounds like a song that lost its way from a Galaxie 500 outtake, full of echoing guitars, gentle beats, and Alec Ounsworth's vocals almost lost in a haze of distortion. The six-minute-plus song does have an undeniable beauty to it but as an opener, it does set a mellow tone for the disc. And when they pick up the pace, it's not nearly as infectious. "Yankee Go Home" has its moments, but it never feels like it gets started, instead ending up as almost feeling like Tom Petty song at points.

One of the most baffling songs on the album might be the first 'single,' "Love Song No. 7." It just trudges on like a funeral dirge with hammered piano and drunk accordion. Some Loud Thunder has a fair share of filler, with throwaway tracks like "Arm & Hammer" and "Upon Encountering the Crippled Elephant." The worst sin, though, might be some of the really poor production that curse some of the tracks, especially the title track (which could have been one of the best). On the surface, it's the most straight-forward pop song on the album, but the first time I listened to it I wondered if my headphone were buying the farm with oversaturated drums and guitars, leaving the vocals lost somewhere underneath. It almost seems shocking to me that the song made it onto the disc in this condition.

Clap Your Hands Say Yeah are a good enough band that the album is not devoid of some real gems. "Satan Said Dance" comes close to capturing some of the horrifically catchy aspects of their debut, with a driving beat, some quirky synthesizer lines, and memorable lyrics; however, again, the song gets a little bogged down in random noises (let's all start calling this phenomenon the "Fiery Furnaces Effect").

"Goodbye to the Moth" — albeit a little too long for its own good — has a Modest Mouse-like charm to it, while "Mama, Won't You Keep Those Castles in the Air & Burning?" (beyond the gem of title) gets moving toward the middle with the vim and vigor we expect from the band. The high-point of the album is "Emily Jean Stock," where the band is able to combine the obvious Velvet Underground tendencies they like these days with hand claps and hooks. It feels like the most fully-formed song on an album of half-constructed thoughts.

Maybe I'm being harsh on Clap Your Hands Say Yeah. They are willing to more-or-less shed everything that made them the marvels of the internet music scene and go in an entirely different direction. Some Loud Thunder does show that the band has depth, but in all, it feels like an album full of outtakes and experiments rather than a fully developed album — and the misses far outweigh the hits.