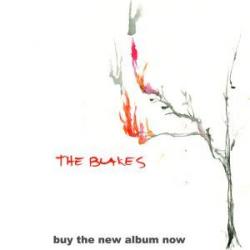 Hey Seattle? Remember how you felt when you first discovered the Lashes?? Remember how enamored you were with all the rock and the attitude and the belts and the hottness? (Aside: they're still hotties — and hurrah to them for their $wank record contract — but I know my crush faded a bit on that last record.) Do you still shriek with glee from the rawness of that first Strokes record? Well, The Blakes — a three-piece from Seattle with dreamy names and dreamier haircuts — have all that and more, and are totally beyond worthy of the Sassiest of Cute Band Alerts.

Sure, they're gorgeous. It's undeniable; they're easy on the eyes and make the indie rock girls (and I'm sure a few boys) go weak in the knees. But the Blakes aren't some flash-in-the-pan schoolgirl crush band. Their debut release teems over with driving rock n roll, plus tons swagger and hooks to match. The band (vox/guitarist Garnet; vox/bassist Snow; and drummer Bob) mesh jangly, Brit-infused guitars with loads of pure pop bliss and a splash of sloppy beer-swilling (so the fellas will find plenty to enjoy here as well). KEXP has been all over their debut single "Don't Bother Me," and I totally understand why. It's the best three-minute radio single I've heard in ages.

A lot of retro rockers have come and gone over the past handful of years, ushered in by predecessors like the Strokes. But while many may have joined the scene for their 15 minutes of fame and then quickly faded out, The Blakes appear to have what it takes to hit the mainstream scene and stick. They've got straight up rock and roll numbers and smart like the brashly acidic "Streets.” There are the lustful lyrics like on “Vampire," which oozes a sexy beat and come-hither vocals. And there's even a sweet ballady moment too, in the almost quaint "Lintwalk." The record relies on straight-ahead 4-4 time, massive guitar hooks, dirty, gritty vocals—all that is and always has been great about rock and roll.

From the opening riffs of "Two Times" to the closer "Streets" some 30 minutes later, this self-titled release is a great go-to record with tremendous appeal for any moment, any mood. And I'm not just saying that cause I'm staring at their photos on MySpace right now. (I'm not!)