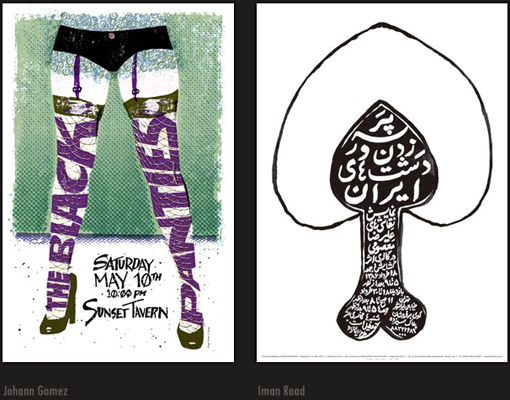 When you need a refuge from all the crowded thoroughfares, the visual art displays nestled in the air conditioned Northwest Rooms are the elbow room places for you. This year's offerings feature two exhibits on the hot topic of the Middle East, ripe with juxtaposition.

While we have the luxury of seeing show posters on nearly every corner of Capitol Hill, in Tehran typography is not so highly regarded. The Seattle-Tehran Poster Show featured in the Fidalgo Room pairs local posters of shows you probably have personally attended with rising Iranian graphic designers' work. Side-by-side, you almost could not tell which country the posters came from, until you realize one is in English and the other in calligraphic Farsi.

But what caught my eye the most in this series was the "map" of the United States. Divided by sections rather than states, portions include Seattle, California, and Baha on the West coast, FEMA Trailers as the entire southern half, and Little Havana replacing where Florida should be. Rather than being a poster, this was painted straight on the wall of the gallery.

Down the hall in the Olympic and Orcas Rooms, contrast is more apparent to a high emotion effect. Entering this gallery, you view the intimate images of a grotesquely disfigured Iraq soldier whose finance chooses to stand by his side. We have an insight into their home as they plan their wedding.

In the next room, there are more images of those affected by their service, many amputees, some with skin recovered from serious burns. Yet, the most gripping portion of their experiences isn't their pictures, but their personal story accompaniments. Almost all of them convey they have no regrets about the adrenaline filled minutes serving in the war, bored now that they are nearly bedridden with their acquired disabilities back at home.

Mixed in with the soldiers are images of women in these war torn countries. Born into societies set up for them to fail, the women perserved to gain respect and, in some cases, leadership roles in their villages. One image demonstrating this never ending will-power is of a 9-year-old girl who, despite having to gather water for four hours a day, works diligently on her homework.

The show was a sobering and beautiful pause in the frenzy of music of Bumbershoot.