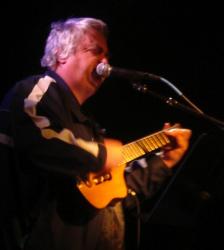 I’ve passed up seeing Daniel Johnston more times than I’m comfortable mentioning here and if I could go back in time and find myself at 20 or 21 i’d shake myself and slap some sense into my young head for missing such a wonderful performer. I circled this date months ago when I saw it on the calendar and told myself that this would indeed be the day. Neumo’s was packed upon arriving at the venue and for good reason: this was never going to be a four-hour marathon show; it was going to be brief, but a moment in time that should stick with everyone who witnessed it.

Kaz, or PWRFL Power, opened the show. I was somewhat predisposed not to like him after hearing some of his music awhile ago and not being overly impressed — again, how wrong I was! He took the stage with just his guitar, introducied himself, and informed us he was going to play nine songs and they would all be two and a half minutes long. How nice to know how long an opening act is going to play, down to the second even. It didn’t take long to win me over; this guy has charm and I could have watched him for another twenty-two and a half minutes.

He performed in that awkward ‘aww shucks’ fashion which may occasionally come off as pretentious or play-acting; however, his humor and storytelling made up for it and more. His talent as an instrumentalist was undeniable, as was his ability for crafting sharp, witty songs that involve the listener on a personal level. Everyone laughed out loud during “Tomato Song” and “Chopsticks Song.” While his meter occasionally faltered it nearly always just added to the quirkiness of the performance, and the end product was beautiful in its honesty and simplicity.

The Dead Science, who would also serve as Daniel Johnston’s backing band for a portion of his set, were on after a short break. It's difficult to pinpoint just what makes this band tick. Their live set combined a variety of influences and epic progressions that never quite settled in to give the audience a chance to enjoy the music. The band are all quite talented instrumentalists; however, I found nothing nothing truly redeeming about the music itself.

After another short break, Daniel Johnston took the stage alone and was greeted with an enthusiastic response from the crowd that could have humbled anyone. Daniel is no longer the boy we remember from years ago. Years of smoking and non-discriminate eating have made him appear, well, a lot like my dad, with a big jolly belly, gray hair, weathered hard-living features, and great big smile that could cover a whole room with its sincerity. He unloading his binders onto an old metal music stand and singing a cappella to announce the beginning of his set.

He played three songs this way, including “Mean Girls Give Pleasure,” featuring his unique pounding of the electric guitar, raw and unadorned, without any pretenses and 100% pure Daniel Johnston: the person we want to think about toying away in a basement surrounded by comic books and his art. He thanked everyone and told us how great it was to be in Portland… and then corrected himself with “uhh, Seattle.”

Daniel was then joined by Brett Hartenbach and his steady acoustic guitar, which allowed Daniel to concentrate on what he does best: spilling emotions from his bare soul. No wonder we all identify with him so much, when he's able to be so honest and forthcoming about his pain and fears. Daniel performed many of his favorites during this section of the show. Touching performances of “Living Life," “Life in Vain,” and John Lennon’s “Isolation” filled me with an indescribable feeling, and unforced smile, and actual chills as Johnston gripped the microphone as if the ship was truly going down. The sense of longing and opportunities lost was actually palpable in the crowd.

After another short break Daniel retook the stage with the members of the Dead Science for a full-band portion of the set. He broke out into “Speeding Motorcycle” and other familiar ditties, including “Walking the Cow” and “Held the Hand.” The Dead Science (whose name Johnston also forgot) provided a steady backing band that didn't overpower the vocals and were exceptionally adept at keeping up with the spur-of-the-moment changes he made during songs. The only song that presented any real problems was “Casper,” which would be tough to recreate for someone just playing by themselves with a guitar or organ with its off-beat syncopation. All the Dead Science could do was grit their teeth, keep playing, and get through the song. I truly felt for them at that moment but Daniel was unfazed and did not falter.

Another short break and the encore began, which again featured Daniel with Brett Hartenbach on “True Love Will Find You in the End.” Huge applause. He thanked the audience once more and gave us an a cappella version of “Devil Town,” which became a sing-a-long. With that Daniel thanked everyone again and left the stage.

Despite the shortness of the set (and the presence some ill-timed random meatheads yelling "yeah!" and "Daniel Johnston!!" who seemed there purely to witness a spectacle), it was truly amazing to witness a living legend perform his life’s work and show his heart to everyone in attendance.