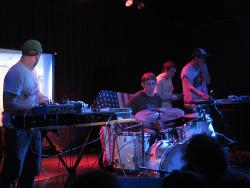 Drums front and center with Truckasauras and Sleepy Eyes of Death

Drums front and center! Both Sleepy Eyes of Death and Truckasauras staged their setup with drum in front. Yes, you read right. Truckasauras had a live drummer! You saw it at Neumo's first. Or at least, I did.

The live drummer contributed a rich texture to the Truckasauras songs, as they usually are accompanied by a drum machine. These guys should have a live drummer more often. Front man Adam Swan broke out the megaphone a couple of times to give earnest shit talk to the crowd. The megaphone reminded me of the Dan Deacon show: knobs, bits, megaphone, smart video. Dan Deacon similarities, for sure. Truckasauras is a reliable and nearly breakout band which could easily hit it big this year. The Truckasauras debut album is due out May 27th on Fourthcity Records.

Sleepy Eyes of Death’s instrumental rocking shoe-gaze had the mostly male crowd at concentrated attention throughout the set, punctuated by cheers and applause after each breaking-wave-like song ending. The group’s keyboards, guitar, drums, and lighting offered rich indulgence in sound and vision. Although their songs have a sameness about them at the moment, Sleepy Eyes of Death has the performance chops and skillz to change up their tempo and style a bit. They’ll just need to figure out how to introduce some variety if they want to grow their following.