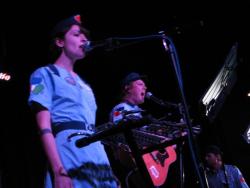 Danielson: Rockin' the kids at Vera

Danielson, sometimes Danielson Famile or Danielson Family or Brother Danielson, is the quirk-pop outfit headed by Daniel Smith of Clarksboro, New Jersey. Through many incarnations, spiritual and creative endeavors and a cavalcade of onstage props and costumes, Daniel Smith and fellow Danielson members, which often include his family, bring the holy spirit into indie rock. While their lyrics are unashamedly Christianity oriented, they are truly inventive musicians and their talents surpass any religious/secular boundaries.

The Vera Project was an ideal venue for Danielson as many of their fans are young kids and their families. I lamented the lack of bar at the Vera (that didn't stop me… I got tanked at a Mecca beforehand and quite enjoyed my surly bar maiden) but it was quite refreshing to see babes running amuck and ten year olds gettin' down to the family-friendly sounds of Danielson. The six-piece played songs "they hadn't played in a while" in support of their retrospective out on Secretly Canadian this month, Trying Hartz. 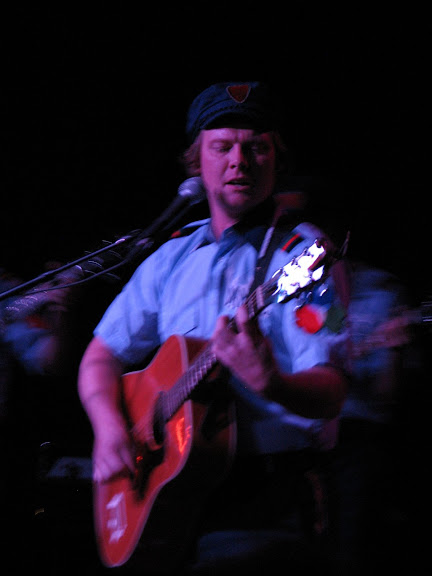 Encouraging crowd participation, Daniel quipped that "this next song is a clapalong" or "this next song is a singalong". They flew through the songs with barely enough time for clever quips in between. The de facto figurehead of Danielson leads his band with a piercing falsetto that doesn't waiver. It's ALWAYS that high. Their (successful) formula is: begin with Daniel childishly whispering amongst timid percussion brush work, morph into a full-on rambling pop chorus accompanied by various members of the band, throw in a 90s garage rock sound and a glaring trumpet and tweak it with handclaps, auxiliary percussion and some genius rhythmic hiccups and you get the slightly sugar-coated, hippy-love intense sound of whatever conglomeration happens to be Danielson at the moment.

Danielson's songs are more than just smartly place tambourine shakes and punchy drums; there are real lyrics in there, lyrics written from the heart and a message bleeding through all the pop. The Vera Project was about 75% full, and I know that if the joint had been packed, Danielson would have responded in kind with more oomph than you can shake a stick at. They feed off the energy of their audience and play just to see people respond to what they've put so much of theirselves into.

The entire Danielson troupe was decked out in their trademark nurse's uniforms, complete with custom Fluevogs designed by John Fluevog himself. This charming and fresh sextet have been around for years, born out of Daniel's college-aged epiphany and augmented by family support and a remarkable dose of ingenuity, and I don't see their fountain of inspiration running dry anytime soon. They're a sight to see live and a pleasure to see work their magic… Danielson are true artists, crafting infectious pop riddled with Jesus lyrics and an undeniable urge to smile.