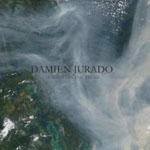 Caught In The Trees

I have been a fan of Damien Jurado's since his late 90s debut, Water Ave. S. It would have been impossible for me not to be, due to my love for his work in hardcore and then more melodic emo-punk bands in the decade of that release.

But I have often felt overwhelmed by Jurado's prolific nature; the guy has a serious work ethic, like his hero Joe Strummer. Last year's And Now That I'm In Your Shadow had as much lyrical subtext to investigate (the falling apart of a once passionate primary relationship, the falling down of a psyche, two thematic biggies in his work) as it did musical expansiveness to explore.

The new album, Caught In The Trees not only adequately follows up all the dark subplots Jurado has been scripting since the time of the eternally-embittered The Ghost of David (2001), now he's fleshed them out into a movie-sized album. This is possibly the shotgun-zenith of an extraordinary, long burning career.

Opening deceptively with "Gillian Was A Horse," an almost-spritely mid-tempo song with a sweet melody that clearly details the debris of an entertainer's life becoming sacred and the disreality setting in around him, soon "Caught" shuffles off into a dark room, drinks a whole bottle of bourbon, and calls the Crisis Center. The first few times through it's a dimmed scanner, but then the characters of the songs bob to the surface.

Jurado's albums always have some emotional-textural filler, little breaks here and there, but not here at all. The guy in "Dimes" is filled with a dysphoric desperation about losing his connection to another man's wife; "Sheets" may be that husband, as he imagines his woman sleeping with another man hiding behind emotional weakness. "Coats of Ice" is the grimmest portrayal of a singer becoming the damage of his own creative expression since Tom Waits exposed some other artist in "Who Are You This Time?"

These handful of tracks would make Caught one of the best albums of the year anyways, but a return to the grim rock of "Go First" and the brilliant layered vocals of "Trials" push it far past 2008. Much credit should be given to collaborators Eric Fisher and Jenna Conrad as well as the other musicians for an astonishing display of diverse musical coloring throughout. Jurado has picked an incredible team to perform these impeccable songs with.

For those who may have found his work merely pretty before, now will see it is beautiful. It is the kind of beauty that not only comes through deep pain, but is brave enough to show how much it felt getting here as well.