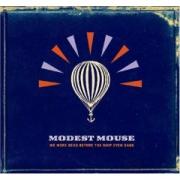 (Note, today a weird thing happened. "Radio Song" by R.E.M. came up first … again. Honestly, I can't say I've heard this song in year, yet it comes up first on my iPod twice in two days. Odd.)

I've always been against labelling bands as selling out they really, truly sold out (see Liz Phair for the textbook example of "selling out.") The Mouse, I don't think, have really sold out as such. They've becomed more polished, they've added an indie rock mercenary like Johnny Marr (it could have been worse, maybe Isaac had a guitar man crush on Bucket Head instead) and they're now a #1 band, but really, the only thing that I see as significantly different on "Dashboard" than other Mouse singles is (a) it is faster; (b) it has horns and strings and; (c) it has some Smiths like guitars (see above). It still has Brock's nonsensical lyrics with his half talked/sung/shouted vocals and it still is better than 95% of the stuff on the radio. That being said, I have to say, I haven't really listened to We Were Dead Before the Ship Even Sank that much since I got it when it came out. Why? Why is it that I turn to The Lonesome Crowded West or The Moon and Antarctica rather than shiny, new Mouse when I want to hear them? Am I sinking into a pit of my own personal nostalgia (I guess nostalgia is usually personal isn't it?) Does this cloud my vision when it comes to albums by bands that had previously released nearly perfect works. Yeah, probably it does. I'm not sure how to get over that. However, before you go and label Modest Mouse a bunch of major label whores (and I'm not saying they're not), just check to make sure you aren't remembering things by starting your sentences with "Why, in my day … " – if that's the case, you might think about hanging up the music nerd title and fall back into a comfortable life of reminiscing about when music was better, children were robust and Bill Clinton was more than the answer to "who is married to Hillary?"