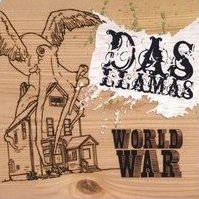 On their third release, World War, Das Llamas mix hammering hooks, dub bass lines and propulsive percussion to craft gritty music that reflects post-punk and goth influences while incorporating elements of electroclash and no-wave. At times the instruments blend into a cacophonous blur of sound, but the music never veers into grating or atonal territory. Throughout the album, the band enigmatically manages to strike a balance between frenzied, speedy riffs and danceable melodies.

Lead singer Kerry Zettel’s voice combines high-octane intensity with full-bodied blues and his vocals are simultaneously velvety and venomous. He delivers a full range of screams and drones, but even at his most angst-ridden moments there is a melodic (albeit acerbic) tone to his voice.

His baleful bellow adds a shadowy undertone to “Whoa Oh Oh,” a playful and catchy collection of synthesizers and jagged guitars. Throbbing rhythms share center stage with Zettel’s vocals, and full-throttle drumming complements his frantic delivery on “Wood on Bone.” This song is the first cut on World War, and it introduces the listener to Das Llamas’ menacing guitars and malicious lyrics: “We took the money just for fun, but broke their legs so they won’t run.”

“The Wedding Song” begins sedately, and during the opening bars it’s easy to assume that the song may even be a ballad. But gloomy guitars and aching, angry vocals quickly make it clear that this is not a tune triumphing marital bliss. “The Others” is an eerie, but harmonic combination of the Das Llamas' quintessential sound, with spastic guitars, fat bass lines, and rich vocals.

Das Llamas’ music could never be described as joyful, but amidst all the growling, guttural savagery there is always a jocular levity that keeps you gleefully bopping to the beat while you barbarically bang your head.