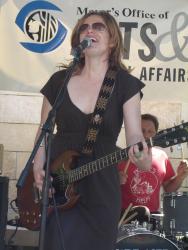 Visqueen in the sunshine

What a glorious day! For a delightful hour at lunchtime, the Mayor's office hosted a free, outdoors show featuring Canadian Carolyn Mark and Seattle's own Visqueen. I braved the traffic of Denny and downtown Seattle and made it there to catch most of Carolyn Mark and all of Visqueen's awesome set, and am still buzzing from the mid-afternoon adrenaline rush of it all!

I wasn't familiar with Carolyn Mark's work, but have had several folks I respect greatly (hi Estey and Jesse!) both sing her praises, and now I understand why. You may be familiar with her work as half of the Corn Sisters (with Neko Case serving as the other half of that duo). Seeing her live, it's not hard to imagine the pairing; Mark's stellar vocal stylings and alt-country sensibilities are a natural and worthy blend for the incomparable Case.

But I was all ears for Visqueen, and the band, as always, did not disappoint, playing an exuberant set full of great tunes (both as yet unreleased ones as well as old favorites) and hilarious banter from witty, sassypants singer (and TIG love advice columnist), Rachel Flotard.

Visqueen played a 40-minute set, with highlights including old favorites like "Manhattan," "My House," and the final song of the set, "Zirconium" from their previous stellar releases King Me and Sunset on Dateland. They also played several great new tracks, at least one of which I could sing along with despite having only heard it once before, at their show at the Crocodile back in May. Their hooks and refrains are so catchy, it scares me if I think about it for too long.

But I jest. Hearing new Visqueen tracks was nothing short of thrilling, and spending a lazy afternoon rocking out with the band was a complete treat. I know the whole audience felt this way, and as people started leaving to return to their workday drudgery, you could sense the reluctance to leave such a sunny experience, as if they had giant *sigh* thought bubbles over their heads.

Even Rachel quipped, "Does anyone just want to quit their jobs today?" to much cheering from the crowd. She followed up to say, "To anyone who quits today, our drummer will support you for at least the next 15 minutes!"

I'm sure people were tempted.

An event highlight: an entire camp of kids came to see the set, and in them I think it's safe to say that Visqueen earned themselves an army of superfans. After the set, the kids followed Rachel as if she were the Pied Piper, taking photos and generally proclaiming their enthusiasm for the band. Rachel even promised to come play their daycare.

Another highlight for the event was getting to see so many imaginary peeps! Team Imaginary was definitely well represented, with ChrisB, Kiku, Chris Estey, and even Joseph Riippi (in from NYC!!) all in effect, as well as pals Kaley Davis, Jesse from Easy Street, Russ, Stephanie Pure, and many more. Wahoo for midday imaginary rock and roll gatherings!