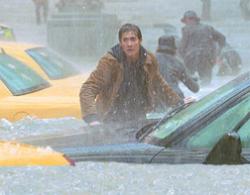 The Day After Tomorrow

After watching the new Roland Emmerich (Independence Day, Godzilla) summer popcorn extravaganza, I leaned over to my friend and whispered, "Republicans are going to hate this movie." The liberal agenda becomes more pointed, you see, as the film's disasters mount, often with comical effect: the sight of Americans fleeing U.S. soil over the Rio Grande is pretty good, and the audience laughed when a newscaster said the only way Mexico let them in is because the U.S. President forgave all Latin American debt.

Yes, the emo-star of Donnie Darko (which, curiously, has just been re-released in an extended director's cut) is now the emo-star of The Day After Tomorrow, playing a hipster dork whose problem-solving skills come quite in handy when he becomes holed up in the Public Library of a flooded and frozen Big Apple. He plays the son of Jack Hall (Dennis Quaid), a paleoclimatologist, and Dr. Lucy Hall (Sela Ward), a pediatrician. And though billions are dying all over the world, the film focuses on this cutesy family to play up the drama. As long as they are okay, the blockbuster formula goes, the audience is okay.

It should be mentioned that since this is a crappy summer movie, and everyone involved seems to know this, The Day After Tomorrow should not be criticized for its faulty science-so a shelf breaks off in the Arctic and tornadoes hit L.A.? Why not a flood? I do have a large problem with the cut-and-dry morality of the film, which becomes tired at a few key points: when Jack Hall, traversing the frozen-over landscape from D.C. to New York, puts all the mass death in perspective for us by worrying over his skills as a father. We are to be happy that the main characters lived, even though several important people die offscreen and the populace is frozen/drowned/tornadoed (but only in distancing longshots).

If you take the movie for what it is, big-budget morality with astounding effects, it's pretty enjoyable. Anytime Dennis Quaid gets boring, don't worry: Gyllenhall and his league of nerds aren't too far away, and it's refreshing to see smart teens inside a big stupid movie for once.

Alex Garland's first novel, The Beach, was a brilliant travelogue poorly adapted into a weak Leonardo DiCaprio vehicle. His second novel, The Tesseract, has been adapted by Oxide Pang into, well, a show-offy mess. I suspect Garland's prose style, which is sleekly cinematic and bounding with decent ideas, looks attractive to film producers. The only problem is they don't get the ideas.

It was a good idea allowing native Pang to direct the film, which takes place in Bangkok and keeps the central conceit of the novel: the tesseract is a figure that only exists in the fourth dimension, the unfolded shape of which we are witnessing in the four intersecting plotlines. There's the British drug smuggler (Jonathan Rhys-Meyers), a nameless Thai assassin, the British psychologist (Saskia Reeves) researching children's dreams, and the little boy (Alexander Rendel) at the center of it all.

The jumpy camerawork and editing work half the time, sometimes heightening the suspense (when Rhys-Meyers runs into the police), sometimes distracting us from the action (most of the overly-stylized action scenes). All the elements are laid out impressively, and the first half of the film is pretty enjoyable. Then it all comes crashing down as characters make unrealistic (and incredibly stupid) decisions, they start becoming voiceboxes for the script's morality, and the actors all seem to give up.

Maybe I'm just cynical, but if a streetwise Thai preteen is the lynchpin of your movie, make sure you cast someone the audience identifies with. As it is, not only is the kid annoying, but I kept rooting for him to get his comeuppance. By the climax, I had lost complete interest in who lived, who died, and who learned their lesson. And the lesson, apparently, is this: Be honest. Help others. Don't smuggle drugs out of Thailand.

I won't even attempt to explain the convoluted plot, which involves soviet hockey, incest, lots of vengeance, abortion clinics/salons, and ghosts that become barbers. Through all of the nudity and the hilarity run golden age musical scores, which fits the silent movie feel. The director even casts "himself," an actor (Darcy Fehr) who plays the role of Guy Maddin.

Cowards Bend the Knee is, in the end, about as thrillingly experimental as I like to go without any of the filmic conventions of narrative being lost. But beyond any kind of formal departures, there is something that disturbed me. The film is chock full of female and male explicit nudity and sexual themes, and was partially financed by the Winnipeg Arts Council. It was so refreshing to see a government-sponsored arts fund taking such risks and allowing for such artistic freedom that for this American reviewer, I could not help but wince at the past twenty years of scandal with some of the more shocking NEA-funded art pieces (e.g., Velasquez's "Piss Christ"). I left the film somewhat wistful of an NEA that also funded difficult, mature films like Maddin's (or Bruce LaBruce's). If at all possible, go see Cowards Bend the Knee. But don't be surprised if it leaves you wishing such liberal arts funding existed stateside.

Full disclosure: though Eric Rohmer is one of the founding directors of the French New Wave, I have only seen one other of his films, The Lady and the Duke. That French Revolution drama was certainly interesting technically (painted backdrops, filmed in DV), but terrible otherwise. Triple Agent, his newest, made when the director was 83 years old, spurred me on to rethink the rules of film itself. And in this case that's not a good thing.

Purported as a spy thriller, the film stars Serge Renko and Katerina Didaskalu as a married Russian and Greek living in late 1930's Paris. Renko is embroiled behind the scenes in the theatre of war, a former Communist that has renounced his Marxist roots and exiled himself in France. His wife is an apolitical artist, a nice bit of symbolism for the role of art in times of crisis. Rohmer's statement about the politicizing of art is not too optimistic, and while he makes interesting points about the role of art in troubled times, the weight of the rest of the film bears down too heavily.

Which is a paradox, because in another sense, so many of the scenes-which are mostly Renko and Didaskalu talking in epic monologues to each other in their apartment-carry no weight at all. The drama is nonexistent and the acting somewhat stilted. When the couple embraces and cries together, you feel nothin
g.

Which led me to wonder. What is a film with barely a score (played only during the credits and epilogue), no action, a few rotating sets, and a small cast who merely tell us everything, and show nothing? Such a thing is not a film, but a play. Triple Agent shirked all of the advantages of cinema to a degree that it became, instead, theatre. Which is fine, if you paid to go see a play. There is a point where one can strip the gloss of cinema to its bare essentials and then rebuild-that's what the auteurs of La Nouvelle Vague like Truffaut and Godard did. When you forget to rebuild, or refuse to rebuild, then you lose those qualities of the medium that separate it from all the others.