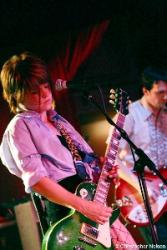 Sing To Me Sweet: Daylight Basement

The night of August 31, 2005, I had just interviewed Ok GO and the Redwalls at the Crocodile Cafe, but actually skipped out before their sets to see the premiere of Daylight Basement at Chop Suey.

This is no insult to those two fine acts — they're reasonably interesting modern rock groups paradoxically rooted in punk ethics and sex-boy charisma. But I was hyper-excited to see what equally intelligent and enticing Bre Loughlin from the band Kuma was going to try next — with her new band, which was originally supposed to be an experiment in electronic music with Mark Miller.

Somehow out of that has come a lean, dreamy spark-burst of a quartet, a bundle of bright red roses with the prickliest of thorns, with Rotten Apples' bassist Dejha Colantuono's coy call-and-response trading off with Bre's slightly raspy tease-torch singing, backed by the sweet six string slash and strum of David Bos from the Jeunes and the plague disco of skin-driving drummer Davis Martin of Maktub.

Though opening for the joyful inverted karaoke-funk of The Long Ranger and the super-melodic house of The Juan McLean, Daylight Basement gave me my favorite live show of the year so far, with stunning, cat-scratch slutter-punk songs like "Godspeed Girl" and "12 Doors" (which you can find on their My Space page) performed with a sleazy joy and healthy verve few bands convey.

As brash as Blondie in their prime, deeper than the Divinyls, this is the dark glamour of real art pop punk as it was originally conceived, gorgeous and grinding in feedback squeal and fishnets.

{Two of three imaginary girls caught the show as well and had a word or two to say about it. Read their commentary over in their hearSAY live show column.}