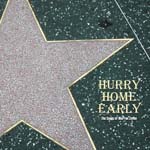 Why should you, the sexy young sparkle-pop press reader, care about a tribute album to a grizzled old (dead) West Coast soft rock troubadour like To review Warren Zevon? Well, the crap sheet sent along with the promo I received mentions what I've always kinda thought about Zevon—that he defines Los Angeles in the same way Lou Reed defines New York. (And Lou Reed is always of interest, so there.) Both are (were) extremely literate, artful pop composers—one may have been more avant-garde and nihilistic, but then NYC IS more avant-garde and nihilistic than LA.

LA has the kind of defeated, drunken, occasionally bizarre and violent bastards and victims that populate Zevon's songs. It doesn't get too cabaret, it ain't going to set Poe to guitar squall or marry Laurie Anderson, but a song like "Carmelita" has enough heart-breaking specific details about "waiting for the man" to actually make Reed's two-chord jaunt seem like collegiate poetry. Reed's junkie is a weekend warrior; Zevon's is pretty much holding on to his lover with one stiff-fingered hand, and a gun to blow his brains out with the trembling other. There's a reason GG Allin covered "Carmelita"—as Rachel Stamp does here adeptly—and it wasn't just to make fun of the aging folksinger.

Okay, sure, Zevon was kind of a dork—that's what seminal LA punk Tonio K called him anyways during an interview I conducted at the Croc in 1991. (Zevon apparently was pissed about 'K making fun of "'Fountain of Sorrow my ass motherfucker'" in his brilliant "H-A-T-R-E-D," but I digress.) Lots of tunes about cowboys, sailors, etc., etc., especially in the early work. But is there anything as creepy as "Excitable Boy" on anything but Dead Kennedys records?

Unfortunately, "Excitable Boy" isn't on here—the material chosen for this tribute is mostly acoustic, tasteful, and uncontroversial (save for "Carmelita"). That means no murder ballads like "Charlie's Medicine," or the absolutely fucking brilliant "My Shit's Fucked Up," written just as Zevon began coping with the mesothelioma that would take his life.

That doesn't mean that these aren't occasionally delectable versions of some really good songs. Wampus is after all, the group that gave us that wonderful Jonathan Richman tribute back in 2001 (If I Were A Richman), and has had a Lou Reed one in the works as well. So they knew what they were doing, even if I barely know anything about the artists selected for this compilation. Phil Cody kicks off the disc with "Splendid Isolation," the best Neil Young song he never wrote, and a group called The Simple Things really dig into the ontologically awkward and cripplingly vulnerable "I'll Slow You Down"—one of the saddest songs I think anyone has ever written, ever (and I imagine it was Zevon singing to God, that he just couldn't keep up with existence itself). Alpha Cat does a sturdy "Reconsider Me," one of the best ballads about redemption I bet Reed himself had burned with envy for not having written. For some reason, Tom Flannery does a soft take on the gripping "Boom Boom Mancini," a truly great pop song about boxing. It's not ineffective, though one wonders what Tom Waits could have done with it.

I have no idea who these artists are, but at least half of them have done this material justice. Now I'm just waiting for guys from GG Allin's generation—punks who listened to Zevon privately, because it wasn't cool, but who couldn't deny his spectacular songwriting talents—to come out of the woodwork and tackle some more of Zevon's dark, strange, affecting songs. God knows there's plenty left.