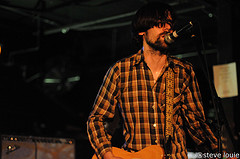 It was an early show on a nice warm sunny weekend evening at El Corazon and that's not a very good combination if you've got a slew of bands playing. I made it to El Corazon early to catch one of the openers called Patrol, a local classic rock / grunge act. I recognized Doug Lorig the guitarist from an old band called Roadside Monument. Once a musician lifer, always a musician lifer.

Next up was Whalebones. While Patrol got the night started by playing straight up rock to wake up the few peeps that came early, I can see Whalebones smoothed that transition into more of a psychedelic rock groove feel with their tunes.

The Subarachnoid Space. Just by looking at these dudes you knew there was going to be some kind of sound barrage in the making. Totally devoid of any singing, you just had to witness their experimental noise in full effect.

When I came down across the border:

i've never heard of "party favourites" as the special term but i knew what he was talking about.

No evident "party favourites" at the show but i think some had theirs before the show or doing it outside.

Despite a lesser turnout because of the uncharacteristic early hot spring heat, it was still a serious sensory experience listening to Dead Meadow play. If they ever play a future show, I'm saving my "party favourites" for that.