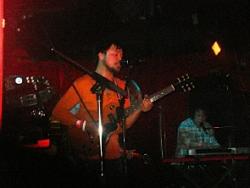 The Little Ones, Ra-Ra-Riot, and Panda and Angel at Chop Suey

Headliners for the night the Little Ones generated a lot of buzz a couple years ago when they emerged from the ashes of Sunday’s Best, and they're still out touring and making new fans as they did this evening. I first arrived at Chop Suey at about nine to catch the last song from openers Sprengjuhöllin, from Iceland. They were not listed on the bill otherwise I would have certainly shown up earlier. They seemed pretty excitable and genuinely happy to be there performing their acoustic up-beat rock for a short amount of time.

Seattle band Panda & Angel took the stage next after quite a while setting up. The majority of their set was a mix of noisy pop that was average at best but certainly tolerable. Their last two numbers, however, were phenomenal and left me wanting more and made me take special notice. The sound of these songs was more determined; they managed to beautifully put two distinct syncopating sections together and use a sudden transition to produce an overwhelming work of art. There was a precious sincerity in their performance. I especially recommend the song “The End is Not So,” which was one of the two closers.

I had heard Ra Ra Riot before but I didn’t know it beforehand and I love them now! Don’t you love when you go to a show and the band plays a string of songs that you’ve heard many times but didn't realize it was them? Wes Miles, who reminded me a lot of Mitch Hedberg in his delivery and mannerisms, and company were engaging onstage and genuinely personable in their quirkiness. They were a large band, boasting six members. I wonder how much bands this size eat at night and tour for months on end? You drive to a new town and play and get your $5 for food and that’s it? Anyway, I digress. Whatever they're paid per show it should be more because they're great at creating a rustic pop, using violin and cello along with traditional drums, guitar, bass, and keys. Sometimes the band lost a bit of focus and became more noisy and chaotic but most of their songs had a solid driving beat that had everyone bouncing by the end of their set. They put on a great show and make quality music.

The Little Ones were on the stage shortly after 11 which was pleasantly early for a Monday night. I had only heard a few songs by them before the show and as an old fan of Sunday’s Best I was completely surprised at the difference in tone of the band. They were happy, smiling, laughing, and dancing as they performed. Everything seemed to come easily for them and their music was equally as light. They approached pop music from many angles, including a Caribbean style using shakers, steel drums, and a pulsating rhythm section on songs like “Boracay” and “Unlock the Door!” and going straight for the heart with aggressive pop songs like “Lovers Who Uncover” and “Forgive Yourself.” The band played tightly together yet loose and full of energy and fun onstage, though by the end of t he performance it all got a bit too shiny and happy and sugary. Otherwise, I thought they were very good and did a good job at keeping up a high energy.